Yes, my dear friends, I am back for the time being. This past semester I was working towards getting my associates, which meant cramming in my last required classes. These classes included biology, statistics, technology, philosophy and film studies.

I thought I was going to die.

But, with some tears, a lot of laughter, a lot of naps and a lot of homework, I managed to survive and get my associates degree in communications! I am excited, but at the same time, I still have at least two more years ahead of me, and am currently working full time and taking a couple classes.

And thus, the insanity of my life continues.

In the midst of this complete chaos and excitement of my life, I made a trip out to Houston to see my lovely, lovely sister, with my other wonderful, wonderful sister. The three of us hadn't been together in quite a few months, so we were all excited for this vacation.

We made a lot of plans for the three of us to do together. We wanted to go to the NASA space center, get manicures, go shopping, go to the LDS Temple and just hang out together.

And so that's what we did. Day one, after walking the dog together and watching General Conference, the three of us dashed off to get our nails done.

I had never gotten my nails done professionally before. In fact, up until probably four months earlier, I hadn't painted my nails in general in at least 4 to 6 years. However, since I was little, I've had a terrible habit of chewing my hang nails. At age 21, I had had enough of this terrible habit, and decided that it was time to quit! So to accomplish this, I began painting my nails in an attempt to stop me from picking my nails.

It helped, kind of. But as you probably gathered from above, I was quite stressed this last semester, and although my habit had dwindled, it was still there. And the week that I went to Houston? Well, it fell the week before finals, and the week after I had gone through a lot of social-life stress. So, they were especially chewed up.

We walked into the nail salon, and a few minutes later, my sisters were seated for a pedicure, and I was shown to the nail polish options to choose what color I wanted.

I had no idea. When I decided to stop chewing my nails, I went a little crazy and bought a lot of different colored polish. So, I had at least one shade of every color in the rainbow.
Well, except for green.

Green is Slytherin's color,  I thought to myself, And it's something different and fun. Guess I'll go with that. Might as well get my money's worth and do something kind of crazy.

So I picked up a deep green color and waited to be seated.

Now, I will be straight up with you. This nail salon was a very stereotypical nail salon. Everyone who worked there was Asian. Everyone. Not a single white, black or Hispanic person worked there. There was one man, and the rest were woman.

The Asian man showed me to my seat. I sat down, and he sat across from me, taking my hand delicately in his as he stared at my nails.

And what were the first words out of his mouth?

Well, I could have predicted that was coming.

"I know, I'm trying to quit," I said kindly, though I was clenching my teeth with embarrassment and annoyance, "That's why I paint my nails. It's to help motivate me not to chew. It kind of  helps. . ."

Though every single one of my fingers was evidence that it was NOT indeed helping.

"You should get FAKE nail. That help," he said as he began to clip, file, and soak my nails, "Many people get fake nail, and they stop. It's terrible habit. Terrible. At least you don't chew nail, but still terrible habit."

I began looking around the room, watching Wheel of Fortune on the television set, and making faces at my sisters who were getting their pedicures done. I wasn't really sure if I should make conversation with this guy, when suddenly. . .

"AYA." he snapped, putting the nail file down.

"Your nail! What's this? What happen?"

He pointed to my finger nails, and I could feel myself blushing again. I have ZERO idea what the cause was, but starting about two weeks earlier, my nails began to split. Like, the top layer of the nail began to peel off at the tip. It was disgusting, and I really had no idea why that occurred or how to stop it.

"I know," I said, "I don't know what happened. Maybe because I've been painting my nails so much?"

He then mumbled, "Terrible habit." and something in Chinese.

I bit my lip and began avoiding eye contact once again.

Soon, it was time to actually start the process of painting my nails. We began a very serious routine: He would paint one hand.
I would put that hand under the mini fan he set up while he painted my other hand.
I would then switch hands while the previous hand got a second coat.
Repeat.

All was going fine and dandy. He was moving past my 'terrible habit' and accepting me for who I was. Most of the comments had stopped, aside from the occasional complaint that his, "hands will be all green after working with you."

And then, it was time for the third coat.

I switched hands, and my eyes widened as I saw a HUGE glob missing right in the center of my middle fingernail. I knew this wouldn't be good.

"I---I---" as I stammered for words, I glanced at his own hands. He wore a large, bulky, gold ring on his own middle finger.
And hanging from that golden ring, was a huge, dangling, drying, dark green blob.
My nail polish.

In a split second, my brain processed the two ways this could go:
A) I could pull the naive card (as I often do), take the blame, and have him go on with his green-handed life thinking that I was a fool
or
B) I could point out his ring, have him potentially curse me, blame me for this problem, and continue to cause public  humiliation to me as he complained, pointed out and wouldn't let go of the fact that I ruined his ring.
Of course this was a gamble, but I knew what I had to do.

"You don't do that!" he scolded me, while he frantically repainted the nail.

"I will be careful next time." I said, my voice void of any sincerity at all.

He said something else in Chinese, and we went on with finishing my nails.

Nail painting = finished. I moved to the front room where he put my hands under another fan. And I literally literally put. He moved my hands to exactly the right position so that they weren't too close to the fan, made sure I didn't move them, and went back to his station to clean.

Paying time. The total came to eleven dollars. Not too bad! I had seen some other nail salons that cost close to 30 or 40 dollars. My sisters were kind enough to grab my money out of my wallet and give it to the guy so that I didn't mess up my nails.

We thanked them, and went out to the car to go to our next adventure; shopping!

As we drove, I retold the story of the ongoing lecture he gave me. We all had a good laugh about it. As we pulled up to the store, I went to take a picture of my nails. . .
Only to see that the nail polish on my right pointer finger was now wrinkly and chipped.
"Are you kidding me?!"
"What is it?" asked my sisters.
"Look at this nail! It's demolished already. Ugh. Oh well. The rest still look good."

But I spoke too soon.
Within that hour, each finger nail got damaged in some for or another. Some wrinkled, some chipped, and the nail that had the blob missing? Well that blob suspiciously went missing again.
At the end of our shopping trip, I stood in line and stared at my nails, shaking my head.

"I payed eleven dollars for a lecture," I sighed.

Needless to say, the next time I will be getting my nails done will be when I quit this habit of chewing my nails. So, if my nails still get damaged within the hour, I would have avoided a lecture. 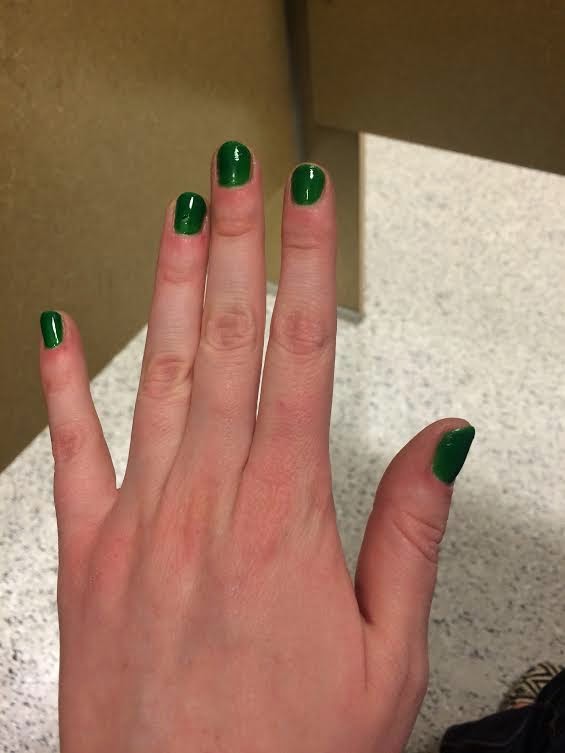 I snapped this picture after my first nail got damaged in hopes to document the polish before it got anymore damaged. 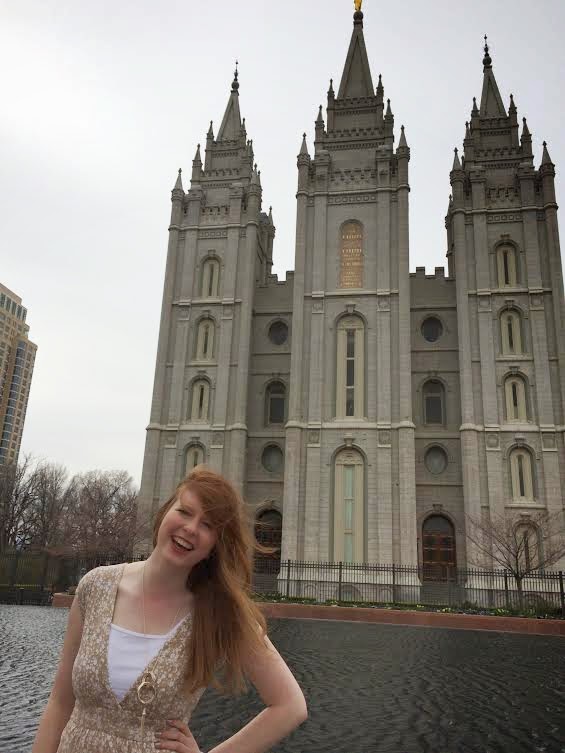