Caught in the Act

And I had the pleasure of that happening to me multiple times this week.

One such experience happened the day of cleaning checks. After a fun night out with friends, I got home around midnight and remembered that cleaning checks were the next morning.

Knowing very well that I would NOT get out of bed at a reasonable hour to do my chores before the managers came to check my apartment, I knew it was best if I stayed up a little late to do them.

I scrubbed the toilet and shower down, swept the floor, de-junked my desk, and in the process, filled the garbage can to the brim with paper towels, dirt, hair, and papers. These were in the small garbage cans - the kind that a grocery sack can fill. It was time to take it out.

I took out the bathroom and my personal garbage bags and tied the top, threw on some shoes and headed out into the night to the dumpster.

Let me paint in your head exactly what I looked like at this moment: make-up smeared under my eyes from the days activities, wearing basketball shorts that showed off my pastey-white, harry legs, a bright blue t-shirt that read: NEW YORK, greasy hair because I had yet to shower, and topping it off with the very first pair of shoes I managed to find: black high-heels.

I looked like pretty stellar if I do say so myself.

I left my apartment and ran downstairs to the main courtyard and realized . . . I had just moved in a couple weeks ago . . . and had NO idea where the dumpster was.
And I sure as heck did NOT want to tromp around my apartment complex looking like THIS in the middle of the night.

I began towards the pool, which still had a few kids lingering by it. I saw a small, public garbage can sitting by the gate that entered the pool, and thought, "Meh. Good enough."

Now this was one of those garbage cans that had a square top and a flap on it. I went up to it, put my first garbage bag up against the flap and went to push it in . . .
and discovered that my trash was a little TOO full.

Well, like I said, I was NOT about to go hike around my complex looking for the dumpster when it was midnight. I was DETERMINED to make this grocery bag full of trash fit.
So, I put the second grocery bag down, pushed with all my might against the first grocery bag, until it finally slid right on into the trash can. Success. Now, I had to do this once more.

I repeated this process. I pressed the grocery bag against the flap, leaned onto it and. . . nothing. I shoved it a couple more times. Still nothing. It was jammed. I sighed, threw my fist back, and began punching the crap out of this poor little trash bag. Inch-by-inch it slid into the trash can, until finally, I threw one last punch, and it slid right inside, and the flap closed.

I dusted off my hands, and turned around to walk back to my apartments . . . to see two girls and a guy staring questionably at me.

I nodded once at them, shoved my hands in my pockets, and walked away with my head down and heels clicking back to my apartment, hoping they wouldn't notice where I lived.

This one, oddly enough, involved a trash can as well.

As part of my job, I report on a few events that happen on campus.

On this particular day, it was raining, and I had to report on an event. So, I threw on my black jacket, threw the hood over my hair, and started my walk to campus.

Within seconds my feet were sopping wet, as well as my jacket. I half walked/half jogged to campus until I finally reached the building where the event was taking place

And it. Was. PACKED. People filled the main parts of every floor as they took part in the activities provided and talked to one another.

Instantly I stripped off my jacket and tied it around my purse, and got to work interviewing people.

As I squeezed through the crowd, the weight of my bag was exaggerated from my jacket, and I found that it kept swinging and hitting people at twice the speed and weight as it normally would. I found myself constantly apologizing to people as my bag hit their butt, back and thigh at a fast speed.

Not only that, but it was INCREDIBLY hot in that building. Almost as soon as I stripped off my jacket did I begin to sweat. I tried holding my jacket a few times, but it was too clumsy and warmed my arms and hands up too much when I cradled it.

The jacket was getting in the way far too much. I had to do a tricky balancing act as I would hold out my recorder while interviewing people, hold my jacket, wipe sweat away from my brow, AND take notes on the interview all at once.

The jacket had to go. But where? I could just see myself hiding it under the staircase, only for some good citizen to turn it into the lost-and-found, and me not being able to rediscover my jacket.

I thought about hanging it up in the bathroom but no, I could see someone taking it or turning it into the lost-and-found there, too.

I trotted downstairs which was the least-crowded floor, although it still had a good amount of people. I wandered the hallways until I found an empty one. In the corner of that hallway sat a garbage can. I began to concoct my plan right then: I would simply move the garbage can, ball up my jacket, and hide it behind the trash can. Brilliant.

Quickly, I went over to the garbage can and wrapped my hands around the sides. I was surprised by how heavy it was. I tugged and pulled, but it only managed to move a few inches at a time. So, I knelt down, wrapped both my arms around the body of the trash can, and did this really weird looking backwards-hobble-while-squatting-while-holding-a-trash-can move.

I really wonder if anyone else had ever done a move like that before.

The whole event had made me sweat even more. I wiped my hands off on my pants, pushed my now-sweaty and soaked-with-rain hair back, and as I wondered why I bothered to shower at all, I turned around . . . and made eye contact with a mom holding her two-year-old, as she looked at me with a very confused look.

I gave a small smile, nodded once, shoved my hands in my pockets, and raced away in the other direction, hoping that I wouldn't run into her again.

The last even happens to me far too often, but it doesn't get any less embarrassing.

I was sitting in class and you see, I sit behind a really cute boy. I've only talked to him once. Partly because we don't get much of a chance to talk in that class, and partly because I already got all the small talk questions out of the way and now have nothing to say to him.

But I get the pleasure of staring at the back of his head and examining his neatly trimmed hair.

But anyway. Enough about my weird infatuation. All you really need to know is I think he's attractive.

Now, as I mentioned in a couple previous posts, I have an unfortunate habit of chewing my hang nails that I just have not been able to kick. It's an issue.

Because of my peeling cuticles, I have taken a break from painting my nails, so my habit has gotten even worse.

We made eye contact.
. . . right as my thumb was up to my mouth as I knawed the life away at a piece of dead skin.

He looked at me.

Slowly, I lowered my thumb to my lap, but the damage was done.  He had already seen my disgusting habit in the act. He knew my shameful addiction.

He turned around. And I shamefully went back to chewing the crap off that stupid piece of dead skin.

I still haven't talked to that kid. I think I basically convinced myself that he found me disgusting after he saw me chewing my hangnail.

Either that, or he thinks I suck my thumb.

Both those are terrible habits, and I wish he didn't think I did either of those, but alas. I was caught in the act. 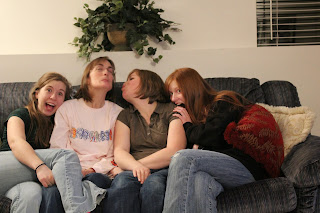