The Greatest Fail that Ever Occurred in One Evening

This weekend, I had the wonderful opportunity to get out of the library and attend a local party, which I was pretty grateful for, considering finals are here and my social life consists of my math and communications homework.

And my boyfriend is this blog.

Now, what was at this party, you ask? Dancing, ice skating, and flirting.

Three things I am exceedingly bad at.

First of all, I want to know who came up with ice skating in the first place. Who the crap thought that attaching sharp blades to the bottom of a shoe and sliding along on ice seems like a safe and fun idea? Part of me thinks that whoever invented ice skating did it out of pure enjoyment of watching people make complete idiots of themselves.

Well I hope you’re happy now, Inventor of Ice Skating, cause that’s exactly what I did.

We arrived at the skating rink, and while I was standing in line to get my skates, I was trying to work through a dilemma I was facing. What size of shoes should I get? I’m 8 ½ wide. . . I didn’t wear long socks so I don’t want my ankles to get sore from the skates, so I don’t want it to be too tight . . . should I get a size or a half-a-size bigger? Or is it just bowling shoes you do that with?

And right as I laced up the first shoe, I could tell I should’ve just gone with a nine. You could’ve fit a small hamster in the toe of my shoe.
I stood up, and even though my toes were kind of slipping, I was still fairly stable on the solid ground, which was more than I could say for the people around me who couldn’t seem to walk in their skates.

Watching the tall, buff, I-played-football-in-high-school-so-therefore-the-world-worships-me guys fall around me? Yeah I felt kind of great.

I waltzed smoothly in my skates over to the ice rink without stumbling or falling.

Okay, Carmen. If you can walk on solid ground, you can slide on ice. It’s not going to be bad.

One of the girls I came with, who had never skated before, stood on the other side of me. She smiled at me, stepped onto the ice, and after a somewhat slippery start, took off skating.

I stepped on the ice and automatically started to slip and lose control of my feet. Quickly, I gripped the wall and tried to get used to the ice. It was then, as I tried to regain balance and control of my feet, that I decided the wall was probably going to be my best friend for the night.


Seriously, this scene from Cool Runnings describes PERFECTLY how I looked:

Halfway around the rink, I met a girl who was also holding onto dear life on the wall. I stumbled next to her and said, “You like skating too, huh?”
“Something like that,” she laughed, “no, I guess I have kind of a fear of ice skating. My friend went ice skating once, and she fell, and someone skated over her fingers. The tips got cut off.”

I’m a journalism major.
I write nonstop.
I like blogging.
I play the freaken flute.
. . .Why? WHY on earth would you tell me that?

Whether or not this was true, I don’t know. But either way, I was getting a little paranoid now. I wobbled past her and began to do my propelling-off-the-wall trick, when I got stopped by a guy, who was running in place while holding the wall, trying to kick up the ice.

Either way, his friend skated behind him, and the guy managed to kick the guy in the shin, to which his friend replied saying, “Ouch, man I think you cut me!”

And that’s when I decided that this was where I was going to face my death. Right here, on this ice rink.

I gripped the wall again, and began to survey my surroundings, plotting on how I could get from the far end of the ice rink, through the crowd, and to the exit without meeting my death and without having my fingers chopped off when I hear someone say, “So what are you doing over here for?”

. . . are you kidding me? Is this guy hitting on me? All while I’m trying to plot my escape?

I look longingly at the exit.

Just agree, Carmen. This kind of stuff never happens to you.

So he grabs my hand, and we start going. We’re a few feet off when he says, “See, you’ve got this! You’re not bad at all.”

He jinxed me. My legs became similar to wet noodles, and I’m pretty sure I was gripping his hand so hard, I broke a few of the bones in his hand.

Better than getting them chopped off, I suppose.

“So, are you a student right now?” he asked me.
“Yeah, I’m a sophomore! You?”
“Freshman. I just turned eighteen last week.”
. . .you have got to be kidding me.
Try not to judge, Carmen . . .try not to judge.
And then guess what he started to talk about!

If you haven’t read my post on October 23rd (when I ran into a tree), just know that I hate sports talk. I know nothing about sports, I’m not interested in sports, I hated playing sports in gym class . . . I just don’t like sports talk.

Thankfully, I stumbled and he managed to catch me, which gave me an opportunity to change the subject.

*note: I hate that response.

“Yeah, I’m like the smartest kid in my classes,” he continued, “But seriously. I know so much more than any other of the kids in my classes, and I’m way better at the assignments, too.”

Aah. Bragging and arrogance. I love that in a man. . . or people in general.

And then suddenly someone grabbed my other hand. Weirded out, I turned to see a guy with a rats nest for hair holding it.

“Hello, love.” I said to him.
“Oh my gosh!” he exclaimed, dropping my hand automatically, “I’m so sorry! I thought you were someone else!”

And he skated away very, very fast.
I blinked, then decided to use the distracted silence to change the subject.

“Cool. So, where are you from?”
“Southern California,” he said, “it was hard there.”
“How so?”
“Well I took a lot of AP classes in high school,”
Uh oh. What have I started?
“I took like, twelve AP classes,” he restated, “and I got like, 5’s on 9 of them and 4’s on the rest.”
Please. . . Please make him shut up. . .
“It was hard, especially since I played football in high school, too,” he said.
Oh my . . . you’re one of the I-played-football-in-high-school-so-therefore-the-world-worships-me people, aren’t you? What have I done?
“But it was worth it,” he continued, “cause I think that’s why I’m so much smarter than the other kids in my classes.”
Exit . . . please come to me, exit.

And then, I totally biffed it, and I took Mr. I’m-Great-At-Everything down with me.

“I’m so sorry!” I exclaimed, and he helped me back up as I made sure all my fingers were still intact.
And it was all downhill from there. My knees wobbled horribly, and I stumbled every couple seconds.

Not to mention my face turns as red as my hair at the slightest bit of exercise, so I looked like one giant tomato on skates.

Knowing I wasn’t going to be able to last skating, or being around Mr. I’m-Great-At-Everything, much longer, I finally said, “Well . . . I think I’m done. Should we head back?”
“Yeah, sounds good.”

He was kind enough to escort me to the exit, except he skated me right through the middle of the swarm of people. Who does that? Who does that? After bumping into countless number of people, and fearing for mine and my fingers lives, we finally reached the exit.

“Nice skating with you!” he said, and took off in an insanely fast speed walk away.
Oh come on, I wasn’t that bad. At least I wasn’t bragging about every detail of my life.

And then I took one step on solid ground, and fell once again.

Quickly, I took off my skates and returned them, and walked as far away from the ice rink as possible, trying to regain my honor. I was heading to the dance floor, when I ran into three of my friends.

“How was ice skating?” one asked me.
After telling them a short run down of the story, one of my friends asked, “Well, he was at least cute, right?”
“. . .he was barely eighteen,” I replied.
“Ooh. . .that’s bad.” Said all three of my friends at once.
“Yeah, it was pretty bad,” I said, cringing at the memories.
“Well we’re going ice skating,” said my friend, “do you want to go again?”
“NO.”

I slammed by fist against the glass to get their attention.

They didn’t notice me, but the ice chaperone guy (who had the most boring job in the world – stand on the side of the ice and make sure no one did anything stupid) sure did. After he gave me a look that spoke a thousand weirded out words, I turned around to go sit in the bleachers . . . and that’s when I noticed everyone that was sitting on the bleachers were cuddling, or making out.

So I sat in front of them anyway and tried not to look at the guy who was chaperoning the ice. I knew the world was right again – I was the awkward odd wheel that wasn’t supposed to be there, which has happened to me countless number of times . . . 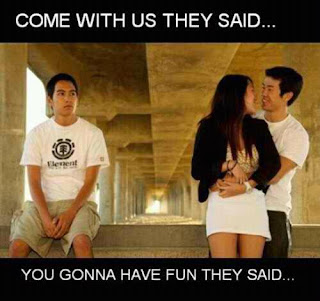 When I got bored and decided to head to the dance floor. Thankfully, as I left the bleachers, I met up with Catharine, who had finished ice skating too, and the two of us headed up to the dance floor, where I danced like this:

I don’t think further explanation is needed for how dreadful it was.

The last awkward event of the night occurred while I was dancing with Catharine. I felt someone grab my shoulder, and I turned around to see a tall, somewhat attractive man in a suit. . .
. . . wearing blue sparkly make up.
“Oh, sorry! I thought you were someone else! What’s your name?”

Okay, seriously, I need to find this girl who looks like me.

Brian tarried away with his group, and I started dancing again. . .

When Brian passed me.
Ooh, I should grab his shoulder like he did to me! That’d be super funny!
So I do.
And then he asks me for my number.

What. The crap.Is happening to the world. This does not happen to me, like ever.

And here I was, thinking he was gay.

Maybe it was the sparkly, blue make up he was wearing.
Posted by Carmen at 9:27 PM