Do you ever just say things that come out wrong? Or you just say whatever pops into your mind? I have a CURSE of doing that. I just have a natural talent of sticking my foot in my mouth. Figuratively. Not literally. I've never tired actually sticking my food in my mouth.

It's not like I mean to offend anybody, I just say what's in my mind, and after I say it, I realize how offensive that could be taken, and I'm left standing there, blushing, and trying to fix the damage that's already done.

Take this last Friday, for example.

I get to my job, sit down at my computer, and (because I live in Provo) we got on the subject of dating and marriage.
"You guys don't even know," one of my coworkers said to us, "I had to live through the missionary age change! After the announcement was made, there was 123 guys in my congregation, and only 27 girls! It was like a blood bath! It was like the Hunger Games! And the worst part was, half of those 27 girls were taken!"
"Yeah, and were the other half single for a reason?" I asked.
He stared at me, pointed a finger at me and said, "That . . . is a very rude question . . . . but yes. Yes, they were."
"Called it!" I said.
Offensive? I guess so. Did I mean it that way? Not in the slightest.
Strike one.

Lunch time came. We all decided to go out to eat. As we walked there, we passed various apartment complexes. I pointed to one, falling apart, brick building and said, "Ugh. That place. Every time I've gone there I have met the WEIRDEST people. Pretty sure everyone who lives there is weird as crap."
"I lived there before I was married." said the same coworker as the above conversation.
". . . .Oh."
Offensive? YES. Did I mean it that way? WELL NOT TOWARDS HIM! He's normal.
Strike two.

I pulled my earbuds out of my ears and rubbed them. I had been wearing them for about three hours straight now, and the insides of my ear were almost soar from them being constantly in.
"Ugh," I groaned, "I think those big, cushioned, headphones look ridicules, but I may have to purchase them. My ears hurt so bad."
"They're not ridiculous! I wear them all the time!" said the kid who I conversed with in the previous two conversations.
". . .Oh."
I was really getting off to a good start with this kid.
Strike three.

It was nearing the end of the day. By now, my earbuds rested to the side of my computer, and I was left to the noise of the office. One of my coworkers sat behind me, playing various music on his computer. They were trying to find something to go along with a video they were in the process of producing. In the midst of the music, some terrible band with an according came on.
"Oh my gosh," I said through fits of giggles, "What on EARTH are you listening to?"
"It's my band," responded my coworker who sat at the computer behind me.
". . . oh . . ."
"It's okay. That was like . . . 16 years ago. Look - I'm shirtless with an according with this video!"
I glanced over his shoulder to see his pale, awkward, 16-year-old self.
". . .Nice."
Still didn't stop me from feeling a little bit guilty.

I guess we can learn from the above conversations that, well, the truth hurts.

But my clumsiness doesn't stop with words. I also have a terrible habit of laughing at inappropriate times.

Since we're on the subject with work, we'll start with the inappropriate laughter that took place then:
We were having a team meeting, and our tech manager was giving us instructions on simple computer care.
"Make sure to turn your computer off at night, especially on the weekends! Otherwise the computers keep running and it overheats. The person who previously used my computer wouldn't turn it off, and it started to smoke."
I couldn't hold it in.
"HAHAHAHAHAHAHAHAHA---."
Nobody else was laughing, but almost everyone was staring. I proceeded to blush, and stick my knuckles in my mouth to muffle my laughter.

Another time, we were sitting at our computers, working. It was pretty quiet, when one of my coworkers piped up and said, "You know, I'm the coworker who is preventing this office from being taking up straight to heaven! Which is good, because we have work to do!"
Oh no.
I could feel it bubbling within me. I tried to stop. Nobody else was laughing! I can't do this!
But, it happened.
"Haha . . .haha. . . hahahahahahahaHAHAHAHAHAHAHA!"
"Well. At least she think's I'm funny." said my coworker as everyone else began to snicker at the fact that I was laughing.

I was once sitting at a dinner of one of my families friends. One of them was talking about how his parents recently returned home from serving a senior couple mission.
"I didn't know it, but they got a new phone number. The day they came home, I kept calling and calling but nobody would pick up! I thought they had died or something!"
"Hahaha!" I laughed.
"Don't laugh," he responded sternly, "It was actually quite horrific."
"HAHAHAHAHAHA."

I could go on. I really, really could. But I think you all have seen enough examples of how clumsiness goes far beyond just tripping and falling; it extends to words, too. 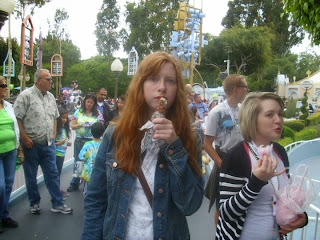 Happy Awkward Tuesday, everyone.
I know I will one day regret posting these awkward pictures of myself.