Welcome to the Area

I recently took a trip back to upstate New York, where I served my mission. While I was there, I was able to visit one of my old companions, because she was working in an area I had worked in during my mission.

I visited her, as well as many other people I met during my time in that city. One of the families brought up my blog and we began talking about it.

"You know," she said to me, "Your companion told us a story about the first morning you were together. Why haven't you written on that?"

"Oh, crap. I forgot about that. That was pretty uncomfortable."

To fully understand and appreciate this story, it is important to understand the whole process and set up of a mission. If you are unfamiliar with the set up, please refer to my post on May 5th. Or, if you just need to feel better about your life by reading by far my MOST uncomfortable, embarrassing, awkward situation on my mission, and possibly my whole life, please refer to that story by clicking the big red "May 5th."
If that doesn't work, just know that I hate technology.

It was time that time of the mission: time for a change. After 7 1/2 months of being in the same city, I was told I would be moving to a city I had only heard about, but was not familiar with, to be with a sister I had only seen once before, but had never talked to and did not know.

I was sad, but I knew it was right, and I really didn't have a choice otherwise.  And so, I went.

It was a two hour drive to the central location where all the missionaries moving would meet up. From there, it was another three hours to the area I was assigned to. I was packed into a van with 5 other missionaries I knew. They crammed our suitcases in between us like a sardine can, and there we went.

I knew nearly all the missionaries I was in the van with, and one of them knew the sister I would be serving with.

"She's great. Very obedient. Passionate. She wears tights no matter what the weather," he responded.

"Okay," I said, still nervous and sad to be leaving the area I was familiar with. "All I know is that she has pretty hair."

". . . I can't really be the judge of that." he responded uncomfortably.

It was late in the evening by the time we got to the area and I met my companion. We talked. It was chill. But two hour later, we were crawling in bed and falling asleep.

We crawled out of bed, said our prayers, and then it was time to exercise.

"So, I like running, but my previous companion wasn't the biggest fan." she said to me.

It's true. I don't do it as often as I should, but I really don't mind running. I always feel great afterwards, and once I get going, I quite enjoy it.

"Yeah." I said, still groggy and really not understanding how anyone could be that chipper in the morning.

"Okay! I'll get my running shoes."

We both put on our running shoes, and took off.

The air was cool and sticky. Still waking up, I jogged next to my companion. It felt great! It had been MONTHS since I had run this long and this hard!

We ran through a few neighborhoods. I was feeling pretty good and then . . .

I gripped my side, and slowed down to a walk. My companion still had plenty of energy, so in order to stay near me, she ran in zig-zags in front of me. Up and down the street she went, zig-zagging. The pain in my side would not go away.

Oh, I was not going to be like this. I was young! I needed to get in shape, pronto!

So, despite my ribs and lungs yelling at me, I began running again.

We left the neighborhoods and went to a main street, my companion not tired at all, and me feeling like a fat kid who had just eaten a pound of cake. My ribs still screamed at me, but I refused to be held back by them.

We crossed the street and entered into another set of neighborhoods. And that's when it really hit me.

It had been MONTHS since I had run this long and hard. I was not in shape in the slightest, and here I was, making my body run on an empty stomach while half asleep . . . BY MY OWN FREE WILL. Not to mention the fact that my finger was in a ginormous bandage. (That's a story for another time.) 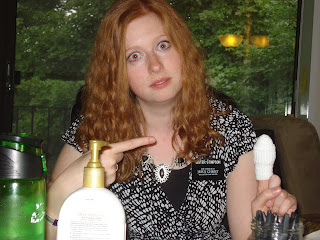 I not only began to sweat, but I began to be shaky, and I could feel the color draining from my face.

"Okay." she said, taking off in her zig-zag up and down the street thing.

I began to walk slower than molasses, my entire body shaking. I felt so weak and so nauseous. Sweat was pouring down my face. My ribs were still screaming at me.

We turned the corner, and I walked pathetically over to some random person's front lawn. My legs gave out, and I collapsed helplessly on their grass.

And promptly threw up. Right in this person's front yard.

Then I just completely gave up on this whole running thing and laid completely flat in the grass, gripping my retainer in my hand which I managed to take out before I threw up.

My companion raced over to me and said, "Oh my gosh are you okay?!"

And that was how the relationship between me and this sister I didn't really knew began to grow.