Last week was my very first day in my Political Science class. To begin, my teacher turned on the projector and showed a list of questions he wanted each of us to answer.

The first read: What is the earliest memory you have regarding politics?

That was easy. Quickly, I scribbled four words:

Two days later, he projected the results. 55% of the class said that 9/11 was their earliest memory regarding politics.

"This is the highest amount I have ever seen for that event," he said. "I wont be surprised if that number starts going down."

He then began to pace the room and said, "You kids grew up in terrorism. It has just been a part of your life. But your parents? Your grandparents? It crept into there's. It was a completely new concept to them. Just think; what concepts will be new to you, but natural to your children?"

He then asked for students to share their experiences with 9/11. Naturally, the majority of the class raised their hand, myself included. But he didn't call on me.

Rewind to my freshman year of college. I was in my joke of a psychology class, where my teacher talked more about her terrible ex husband and awful divorce and life in Puerto Rico than actual psychology.

I learned two things in that class: the science behind introverts and extroverts, and this fun fact:

She stood there at the front of the class, her plump hands resting on her round waist as she said, "How many of you remember what you were wearing, and what you were doing on 9/11?"

The majority of my class raised their hands, myself included.

She nodded slowly and said somberly, "When it comes to certain events that are particularly traumatic (such as 9/11), it is not uncommon for victims to remember strange details, such as what they were wearing, and what they were doing at that exact moments. Although some of you may not have been in New York City, or had family members there, the event was so horrific, it is natural for the human brain to be traumatized and remember facts such as this."

She asked for a few students to share their experience with 9/11.
I raised my hand, but did not get called on.

Rewind to my junior and senior year of high school.

My senior year, I aided for my junior year history teacher. Thus, both years I saw the powerful slides about the Holocaust, riots in Egypt and Lybia, and especially 9/11.

We watched footage of the planes crashing into the building, and residents screaming in terror.
This was the first time I had seen that footage.
Tears sprung to my eyes, sorrow filled my heart, and rage surged in my stomach.

I began to mumble my story to the classmate next to me, but got drowned out by everyone else sharing their stories.

Rewind to a few months after 9/11. I stood in the kitchen, leaning on the banister and watching the news. I remember very clearly Bush declaring war.

I trotted upstairs to the bathroom, where my mom stood hanging clothes on an indoor drying rack.

My mom continued hanging clothes as she said, "Some people think we should, others don't. It's really up to you to decide for yourself what to think, but either way, we'll be going to war."

Rewind to a few days after 9/11.
My sister held out a newspaper for me to see. Two colomns stretched across the top of the page, the stoic faces of various men filling little squares.

"These are the jerks that flew into the twin towers," she said.

I took the news paper and began to flip through and look at the pictures of the men, and smoke billowing from the towers.

I sat cross-legged on the floor of my living room, my mom doing my hair. I was wearing a navy blue polo shirt with white buttons on the top, and white bordering the collar of my shirt. I had on tan shorts, and my mom was putting my hair into pig tails with elastics that had little white balls on them so that they matched the buttons at the front of my shirt.

It was no TV week at my school. Teachers, students and parents were asked to go this entire week without watching the television. My parents had agreed to this, and so we sat in silence as my mom did my hair.

I don't remember the phone ringing, but I remember my dad calling and saying, "Turn on the radio."

I don't remember what else my mom said to him, but I remember her walking over to the cabinet below our television set, and turning on the radio. After fumbling with it for a second, it rested on the news.

"What are you doing?" I asked her.

"Daddy needs us to listen to the radio. Something happened."

I listened. I didn't understand what was happening.

"Mom, what's happening?" I asked, because I was sincerely confused.

I didn't feel terror.
I felt pure confusion.
What was happening?

I walked to school completely calm, which was unusual for a child who had severe anxiety.

I don't remember the rest of the day. But we didn't watch TV. Not at school, and not when I got home. I heard the events described to us by people. Over the radio, by word of mouth from peers and adults alike.

Perhaps this is the first example of obedience I remember. We could've watched TV. We were perfectly justified to watch it. Maybe if we had done that, I would've understood the extent to what was happening.

But my parents, and everyone else's parents, had signed a slip of paper saying they wouldn't watch TV that week.

I don't know what my peer's parents did, but I know my parents continued not to watch it.

I remember our school holding a moment of silence.

I remember coming home, and finding out that my dad's airplane didn't leave that day, and he'd be returning home instead of going on his business trip.

Perhaps it was when my sister showed me the newspaper that it hit me that this was an attack directly towards America.

And then when war was declared, I remember feeling anger. Angry at the terrorists who did this, and angry that more lives would have to be lost.

Youtube wasn't around, and by the time it did come around, I didn't think of looking up footage of 9/11. So when I saw it in my history class, I was surprised by how calm I was. I finally understood what was going on this time. Why wasn't I panicked? Because it was in the past? Because it wasn't close to home? Yes, I was sorrowful and angry, but calm.

I had a friend who majored in psychology explain this to me best, "There are some people who do the opposite reaction in high-stress situations such as war, or anything like that. When you're supposed to panic, your emotion feeds off of the energy, and you remain calm and can think level headed. It's a gift, really."

I have had enough car accidents and situations in my life to know that this most likely applies to myself.

This is when I got my first taste of what the victims of 9/11 experienced.

I was wearing a white shirt with blue flowers on it, with a blue bow in the back. My hair was pulled back in a half pony tail. I was wearing my least-favorite pair of jeans.

This is what I wore as I lay, curled up in fetal position, clutching my stomach as I felt like I was going to throw up, absolutely bawling as CNN showed the same clips of the Boston Bombings, where my dad had just been running a few hours earlier.

But I didn't know that. I wasn't there. Nobody was answering their cell phones.

I didn't feel calm then. Not in the slightest.

My roommate burst into the room and yelled, "ARE YOU STUPID? TURN THAT OFF!"

She held me as I continued to cry, and told me about how her dad was working in the pentagon during 9/11. He too, was safe. But she also panicked as I panicked.

And finally, I understood.

I did not choose to join the police force or the military. Oddly enough, this is a desire of mine. I did, however, choose to minor in the study of terrorism. Why?

Because I want to support my troops as best as I can.

Because I want the evil to stop.

And because, as I interview victims of these traumatic events, I will know how they feel. 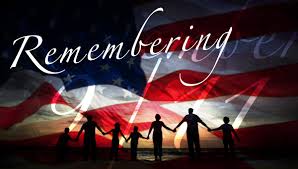