Hello, good friends. My name is Carmen, and I do not know how to swim.

Here's the issue: I LOVE the water a lot! So whenever I go to the beach or the pool, the level I'm able to have fun at is very limited.

The beach? I allow myself to go until it like, reaches my thighs then I'm like, "I'M GONNA GET SUCKED UP BY A WHIRLPOOL! SEE YA BYE!"

Fed up by my lack of ability to swim, I signed up for a swimming for non swimmers class at BYU.

And I knew, I KNEW, I was walking right into an awkward moment.

It hasn't been as bad as I thought, but it certainly hasn't been the most comfortable of experiences, either. Then again, when has stepping out of your comfort zone ever been comfortable?

I sprinted from my Book of Mormon class to my swimming class. Although we wouldn't be swimming the first day of class, I still only had ten minutes to run to a building at the farthest end of campus, and not get lost.

And of course, I got lost.

By the time I stumbled to the pool, class had been going for ten minutes. All the students were circled around my professor as he gave basic instructions as to what to expect from the class. I plopped down, and noticed just how darn sweaty I was.

Between my heavy breathing from trying to catch my breath, the echoey gym, and the different swimming class that was meeting right next to us, I could barely hear my teacher.

Then, kids began to gather up their stuff, and walk away.

I hadn't even cooled down or caught my breath from the trek to the building yet. Grumbling to myself, I swung my backpack over my shoulder, and made the hike back to the center of campus to where I worked sweaty, hot, and grumpy.

Two days later, it was my first class. I dressed in my swimsuit, and went to the pool.

"Alright, everyone against the wall," the coach instructed.

I stood against the wall in between a girl and a boy. . . and realized there was an uncomfortably large gap in between me and the guy. Rolling my eyes at myself, I took two large steps so we were a more normal distance next to each other.

"Stand with your arms high above your head," he instructed once more. "Hold your hands together like this."

Everyone obeyed his words.

"This is the position you will be in when you enter the water. If you're having a hard time standing like that, it's because you're not flexible, and may have a harder time swimming."

"Crap." I mumbled to myself.

"Alright everyone buddy up!" he said. "Doesn't matter if it's a boy or girl, just grab someone."

I looked at the kid next to me.

"Now what you're gonna do," my teacher said, "is one of you will lay down on the ground, and kick. The other person will hold their ankles and provide resistance. This will give you an idea of the resistance that occurs when swimming."

Everyone else had partnered up with someone of the same sex, except for me and this kid.

Um. Okay guys. Let me just paint a picture of what exactly happened after that: In my swimsuit, I laid on my stomach, while this man held my ankles and I kicked.

My only thought was, "This is awful. This is so awkward. I have been watching way too much Law and Order."

We then had to switch positions, and I did the same to him.

He and I literally have not spoken to each other since then.

This week, we began using flippers on our feet, and paddles on our hands to practice the backstroke.

It was a struggle, guys.

But thankfully, it was struggle for everyone, and not just me! We all flopped around the water trying hard to achieve a backstroke.

I was swimming my way from one end of the pool to the other. I was doing decently well and beginning to get the hang of things when-

The girl's hand going the opposite direction in my lane hit my face, dunking me underwater, ripping off my goggles, and scratching my nose.

I jumped up above water, coughing and spitting up water, holding my nose that screamed with pain, and replaced my goggles back on my head.

"It. Is. Fine. It. Happens." I said, and grumpily began swimming again.

I was doing okay, but when I reached the end of the lane, my coach pointed to me.

"What's up?" I asked, swimming to the edge of the pool.

"You're raising your chest up too much," he said, puffing up his chest. "I need your butt out more. Like this."

He proceeded to point to his butt, and do a weird butt thrust forward a couple times. Not really sure what facial expression I was supposed to be making (because I felt exceedingly uncomfortable watching him do this), I just said, "Okay . . . got it . . . you can um . . . you can stop now."

I. Was. Failing. Time and time again I would attempt to swim, and end up underwater, pressed against the wall, or choking on water.

"You're moving your arms out like this," my coach said to me after unsuccessfully achieving the backstroke.

He moved his arms in a bizarre way that looked similar to a fish out of water.

"Is that why I'm hitting the wall?" I asked.

He shrugged, and walked away.

Once again, I attempted to do the backstroke, only successful about half the time.

I reached the other end of the pool, where the coach stood once again.

All I could do was nod, and lay my head on the concrete edge. Sweat began to drip along with water down my forehead. I couldn't breath. I was so tired. So exhausted.

He shrugged, and walked away.

Once again, I did a half-successful backstroke. After one of the three strokes, I reached the end of the pool, and continued to breath heavily and hate my life and my coach.

The other two girls in my lane were already done with their three laps, and I had already done one. I stood in the water, catching my breath.

"Are you okay?" one of the girls said to me in a concerned tone. "Your face is really red."

"Are you gonna do your next two laps?" said the other girl, also seeming very concerned.

I looked at my coach, felt immediate guilt . . .

And did my next two stokes.

As I finished them, my coach instructed everyone to just practice laps until time was up, seeing as we had three minutes left of class.

I began to swim my way back to the front of the pool, when my right leg decided to cramp up and give up on me.

"Ow. Ow. OW!" I yelled to myself, and hopped my way back to the front of the pool.

My coach was staring at me.

"My leg is totally cramping!" I said to him.

"Oh yes. You aren't used to working your legs -"

"-the way you do when you swim," he finished.

I spent the rest of the time attempting to stretch out my leg. When the bell rang, I did exactly what I do at the end of every class:

I pulled my stomach up onto the concrete, and rolled my way out of the pool.

It is the most ungraceful, awkward looking thing you will EVERY see in your life.

No exaggeration. It's awful.

My right leg still hating me, I hobbled my way back to the locker room, changed, and then made my way up the 60 steps back to campus, cursing myself and my teacher for the pain I was currently feeling.

I don't entirely know what the future holds with me and swimming but I can tell you, my friends, that it will hold many more awkward adventures. But I am DETERMINED to master swimming to the point where if I can one day fearlessly jump off of a high dive and make my way to shore safely. 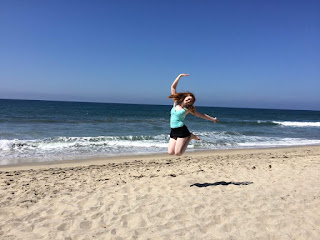