Recently it has been brought to my attention the different gifts God has given each of his children. We all have different talents and gifts. It'd be boring if we all had the same. Some people have been blessed with the gift to remember names and faces.

I, however, do not possess that talent.

It's very unfortunate, really. And pretty obnoxious. I mean, I have other talents and gifts. Trust me, I'm very grateful for these! But man. It is quite annoying when you can't remember someone's name, and it's now to the point where you would offend them if you asked for it one more time.

Now, this fact about me is just another layer to what makes me so awkward, because it has led to so many sticky situations. One of these instances took place on what I dubbed: Chick-fa-le day.

What is Chick-fa-le day? Well, Chick-fa-le is a delicious chicken sandwich restaurant which, unfortunately, isn't found in every state yet (such as New York). The mascot to this store is a cow. On this particular day, Chick-fa-le will give you a free entree or meal if you dressed up as a cow.

Um, free food? I don't care HOW ridiculous I look. I. AM. THERE.

My work just so happened to have a cow costume that we were sharing to go get said free food. What did it consist of? A few black spots, a Chick-fa-le sign, and some ears. Nothing too ridiculous, but I was still getting quite a few strange looks as I walked from the office to Chick-fa-le.

I stood in line, and my ears flew off. Quickly I adjusted it and tried to feel if they were placed properly on my head, when the guy in front of me turned around, smiled and said, "Hello, Carmen."

I looked at him. He, too, was donned in a cow costume similar to mine: spots throughout his shirt and his face, fake ears, and a cow bell.

. . . But who WAS this kid? He didn't look the slightest bit familiar to me.

However, I had learned a long time ago to just go along with situations like this. Eventually I would put the pieces together and figure out my connection to this kid.

"How's it going?!" I said enthusiastically.

"Good! What are you doing on campus?"

Crap. Not only did this guy knew me, but he knew details ABOUT me! Who was this guy?!

"I did, but I graduated with my associates in April. I transferred here."

"Oh, I see." he said, then we both stepped up to separate registrars to order food.

I walked up to the cashier and flashed a dashing smile. She looked at me with a questionable look as I said, "How do I look? Good enough for a free meal?"

My face fell. I peeled the spot off my cheek, and pointed to the part of my skin that I knew was now red, raw and dry from the tape.

"Are you serious?" I said, "I didn't get this rash for nothing."

She shrugged and said, "I'm sorry. What would you like for an entree?"

I stepped away, rolling my eyes at nothing in particular.

I stood waiting for my food, and the kid I had talked to earlier stood in front of me.

"Oh, I'm a news writer for the math and science department. I write articles that promote the department. What about you? What are you doing on campus?" I pried. I HAD to figure out how I knew this kid.

"I work in the library."

"ALEXANDER!" called one of the workers, holding out his bag.

He stepped up and grabbed it. Quickly, I racked my brain. Alexander. Who did I know named Alexander? Someone from my mission? Someone from one of my previous church congregations? How on earth did I know this kid?!

"It was good seeing you, Carmen." he said to me.

"And hey, thanks for praying for me that one time at our game. It was really helpful."

I could feel my face falter a little. I tried not to make my smile too forced or voice sound fake as I said, "Heeey! Anytiiiiime!"

They called my name, and with my chicken sandwich in tow, I dashed quickly back to the office.

While pulling up facebook, I related the story to a few of my coworkers. Quickly, I pulled up the search bar on Facebook and typed:
Name: Alexander
School: Brigham Young University

I scrolled through all the names, not recognizing a single face. Who was this kid? How did he know so much about me?!

Just then, I got a text from one of my absolute best friends.

"YEAH! WHO IS HE AND HOW DOES HE KNOW SO MUCH ABOUT ME?!" I sent back.

No sooner after I had done this, did it dawn on me.

So I sense some bitterness and sarcasm in that comment he said to me.

Since then, I have hung out with him a couple times, and still struggle recognizing him when he isn't with my best friend! And I keep switching between calling him Alexander, Alex, Adam and Aaron.

Oh well. Guess you can't be good at everything. 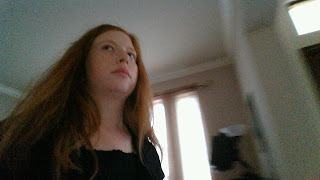