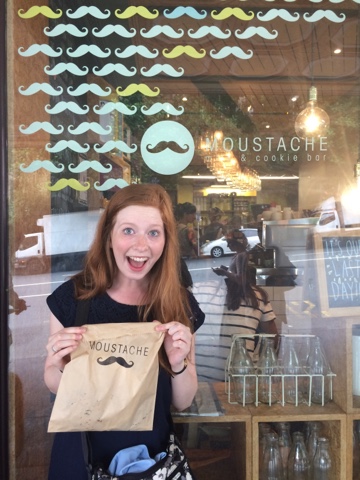 So it has now been exactly four(? Or three? Maybe even five?) of twelve weeks that I have been here in the beautiful country of New Zealand, and it truly has been amazing.

I honestly feel very, very blessed to be here, and I am incredibly grateful for this opportunity. I have experienced so many wonderful experiences while I've been here and I couldn't be happier.

This trip has had quite a lack of extreme awkward moments, which has been surprising to me since they seem to follow me everywhere I go. My life, however completely void of awkward moments either. So don't you fret, I'm sure this awkward drought will end as soon as I am back on US soil, or . . . just soon in general.

Now. I have categorized the awkward moments I have experienced into these subjects:  Accents and different word usages, random cultural things, interactions with people in authority, and other.

I will, however, just be touching on two of these. Don't worry, I've saved some more gems for future blog posts, and even have them typed up to So without further ado, let me begin with . . .

When I first arrived in New Zealand, there was probably a 2-3 second delay in my responses to people because I could NOT understand what they were saying. I had to dissect every word. Just when I thought I was getting used to it, in would come in a different kind of accent, or someone learning English with a New Zealand accent, so it was like a New Zealand accent on top of an Indian/Asian/Italian/French accent, you know?

It can be rough.
Well let me rephrase.
It HAS been a little bit rough.

Although I've gotten used to it (mostly), I still have moments when my only response is an awkward laugh followed by, "Yeah!. . . ." and hopes that satisfies them. This especially occurred on a bus ride to a location we really weren't familiar with. The bus driver was very kind and helpful . . . and his accent sounded like a mixture between a thick, Texan accent and a Kiwi accent.

(Kiwis = native New Zealanders. Yes, I know. It confused me a bit too and I'm still paranoid I'll misuse the term and accidentally offend someone." 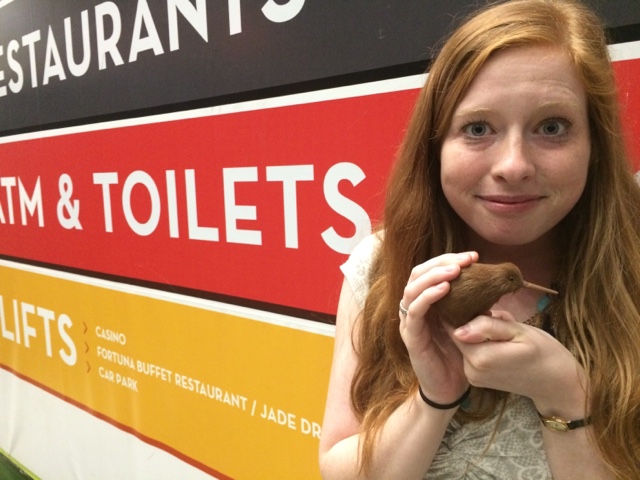 Needless to say this whole bus ride conisted of him asking us a question, us looking at each other, me saying "yeah," him saying "no" and repeating the question, and then someone else in our group answering for him.

I have also learned from my experiences that this is not a completely one sided problem.

I attended a forum on racism held on the university campus to write an article on it. After one of the speakers finished, I began to interview some of the people who attended. I approached a young woman and asked if I could interview her. She eagerly agreed.

After a few questions I asked, "Do you feel that the comments expressed at this event were accurate to real life?"

"Sorry?" she asked, and I repeated the question.

A look of puzzlement came on her face, and this  is when I knew she couldn't understand my accent.

"What about real life?" she asked.

"Oh, um. So like, do you think the things people said were accurate to how real life is?"

And that, my friends, is exactly along the lines of what I say when I can't understand someone's accent.

They also use different words for different things here, which has led me to situations such as the following:

Me: Excuse me, where is your restroom?
Waiter: *confused look*
Me: Oh. Um. Sorry. Toilet.
Waiter: Right over here, miss.

It's just . . . these words sound so WRONG coming out of my mouth. I know that's what they mean here, but when I say it I just feel silly, and like I'm trying too hard to be Kiwi (cause lezbereal. Who wouldn't want to live and/or be from New Zealand? If you answered "not me" then go educate yo'self by watching LOTR or something.) It's weird. And leads to even more awkward situations such as these:

Me: "Hey, do you know where the trash - garba- RUBBISH THING? DO YOU KNOW WHERE THE RUBBISH THING IS?!"
Person: "I don't know."
Me: "Man! Okay, thanks."
I walked over to a different person.
I held up the wrappers and paper plate I was holding, and pointed to them.
"Just up the stairs and to the left."
I gave them a thumbs up, then hoped that wasn't an offensive sign in this country.
If so, I have offended at least two dozen people since I've landed.

Another time, I went to the front desk of the place we are staying at to get a new trash bag. I leaned against the counter and said (in a somewhat "seductive" voice for no apparent reason. My guess is that's the voice I use when I'm trying to sound cooler and more calm than I really am), "Hello. I was wondering if I could get a new tttttttrrrrrrrrrubbish bag for the rub-b-bish bin type thing you know?"
Smoothness gone.
"Oh! Just a small one for the ones in your room?"
"Yes."
She handed me one and smiled, I said thank you, and walked away.

Oh man guys. Now let's talk about the word thank you!
Their response everytime?
"It's okay." or "No, it's fine."
It throws me off every. single. time.

"Alright so I will email you and give you a time where we can meet up for the interview."
"Thank you! You have been a big help - I really appreciate it."
"Oh no, it's okay! I think this is for a good cause!"
NO. I AM NOT APOLOGIZING. I AM EXPRESSING MY GRATITUDE. HOW DOES ONE EXPRESS GRATITUDE IN THIS COUNTRY?

So after pondering how on earth I could express my gratitude here, I finally came up with an idea, and I decided to test it out on the taxi driver.

We arrived at the building we're staying at. I handed him the money, turned to him and said, "I appreciate your service. Than------kyou."
He gave no response, I felt uncomfortable and guilty, and I jumped out of the cab.

Then there's the metric system. Let's not even get me started on my bitterness against the United States for trying to be all hipster and using Fahrenheit instead of Celsius, and feet instead of meters. Ugh. Lead me to believe that the boat we're in is on a river that is 5 feet as opposed to 15 feet deep. 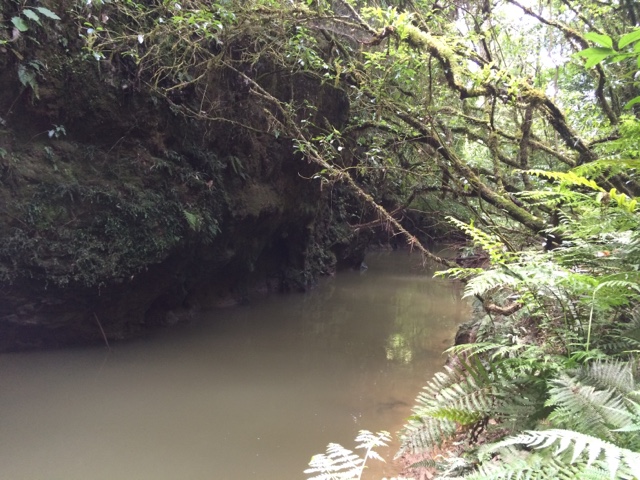 We don't have a full kitchen in our dorms. We have our own rooms, a common room with couches, 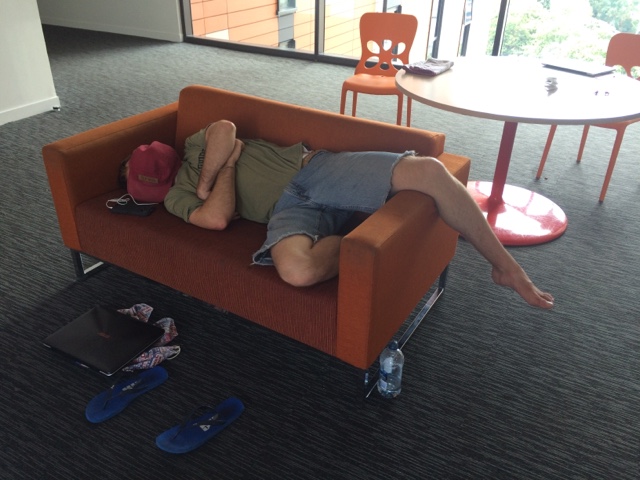 and a mini fridge, a microwave, and a sink.

FOR AT LEAST TWENTY PEOPLE LIVING ON THIS FLOOR.

I'M NINETY PERCENT SURE THERE'S MORE BUT I DON'T WANT TO EXAGGERATE.

SO I KNOW TWENTY IS AROUND THE RIGHT NUMBER.

One day, I opened up said mini fridge to get salami.

All I wanted was a nice, delicious, salami sandwich.

I opened up the mini fridge, to see a large bottle of chocolate milk spilling everywhere.

"Oh, shoot!" said one of the guys, who took the chocolate milk from me and handed me a rag to clean up the mess with.

Annoyance filled me that A) There was now a bunch of chocolate milk on my hand, and B) That I now had to clean it up.

The guys started to chug the chocolate milk, and I went to move some sour cream aside to reach for my salami when-

Lettuce down. Sour cream down. Multiple cheese packages down.

My hand was now soaked in a bunch of unknownables.

Fury raging in my stomach, I clenched my fists and stood up, raising my wet hand in the air and exclaiming, "PUBLIC SERVICE ANNOUNCEMENT! I HATE THIS FRIDGE!"

My group has learned how to turn me out, so I'm not entirely sure if anyone actually heard me. I shoved everything back in and gave up on having a salami sandwich that night, when one of the guys held the chocolate milk towards me and said, "Hey, will you put this back in?"

"No." I said, teeth gritted, and pointing at him. "I will not. I'm learning to not take other people's problems on me, and now is a GREAT time to start."

I marched away, and past two of my teachers when I heard one say, "...take care of your own responsibilities and get off your butt!"

The teacher didn't hear me and said to the other professor, "And so THEN I son that he had to....

Feeling silly, I walked away.

The next conversations took place the day after this happened: 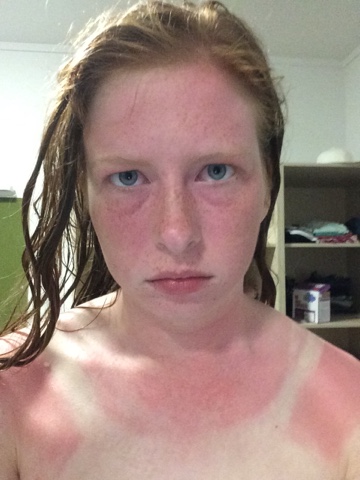 *DISCLAIMER: I AM CLOTHED IN THIS PICTURE!

To answer your questions:
Yes, I have sunscreen. Plenty of it, actually.
No, I'm not allergic to sunscreen - just the sun.
I DIDN'T WEAR IT BECAUSE IT WAS CLOUDY AND COLD, OKAY?! CLOUDS ARE DECEPTIVE.
Yes I KNOW that the sun can burn me through clouds. Don't you see my skin?! I'M NOT STUPID ENOUGH TO NOT LEARN FROM MY STUPID DECISIONS OKAY?!

I've gotten those questions multiple times.
And good news! It's actually a lot better and my face is in the pealing stage.

But the day after was super, super rough. My entire body radiated heat, I was absolutely exhausted, and thanks to my eyes being swollen, I could barely see.

That morning, I hobbled out of bed ten minutes before class started, brushed my teeth, changed, and hobbled downstairs to the room we meet in.

I got there late, and the class discussion was already in progress. My teacher saw me, stopped talking and said, "You got sunburned!"
Still waking up, I stopped, looked at my arms, looked back (more like squinted back) at him and said, "Really? I hadn't noticed."
I sat down.
"That doesn't look good." he said.
"It's pretty bad." I grumbled. It is surprisingly difficult to stay awake when your eyes were forced shut against your will.
"Your eyes are swollen. I can barely see them." he said.
"And I can barely see you." I replied.

Later, the same professor and his wife walked into the common room where I was collapsed on the couch in a heap with cold water and aloe Vera.
The wife hadn't seen my burn yet, which caused her to gasp audibly.
"How's the sunburn?" my professor asked.
"Oh you know. It's there."
The wife, however, went into mothering mode and said, "WHAT HAPPENED?! DO YOU NEED ALOE VERA? VINEGAR? TYLENOL? IBUPROFEN?"
I couldn't help but smile.
"I've got it! Thanks, you're the best."
And in this situation, she knew that when I said thanks I was expressing my gratitude and not apologizing.
"Your eyes are still swollen." he said.
"Trust me. I know."

The next day was still pretty bad, and it was also a lot better. I walked into class on time and sat down.

"Your eyes are still swollen." he said.
This time, I could see a lot more clear and began to worry a little bit.  What if my eyes weren't swollen, and he was just pointing out the puffiness of my naturally small eyes?
"Yes, but I also have naturally small and puffy eyes, so you might  just be pointing out my biggest insecurity." I said.
He shrugged, and began the discussion.

GOOD NEWS! Today, my eyes were NOT swollen, and my professor noticed. Which means, my eye puffiness is not as severe as it could be or as I think.

My forehead also looks like a snake shedding it's skin. It's all good fun.

I am eager for the adventures ahead of me during this experience; and I'm sure I will have many more stories for you all to enjoy. Have a fantastic and awkward day everyone! 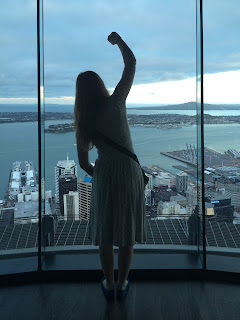