Two Mormons Walk Into a Bar

I apologize for my neglect towards this blog. I'm sure you all have been in great distress over what awkward adventures I have partaken in during the last five monthsish of my life. Don't you fret, because I am back in full force of awkwardness.

One in particular took place on my favorite holiday - St. Patrick's Day.

Why is St. Patrick's Day my favorite holiday? To be honest, I'm not really sure. I don't drink, I'm not even really Irish (although I look 100 percent Irish), and leprechauns kind of freak me out. Honestly I think the main reason it's my favorite holiday is because I look good in green, and so I generally go all out in what I wear.

. . . Well, okay not ALL out like those people you see who wear the leprechaun hats and Irish flags as capes, but I just wear a lot of green. In fact I just bought this pretty green dress that I'm already planning on wearing next St. Patrick's Day. That's how excited I am for it.

So anyway. For no particular reason at all, I love St. Patrick's Day.

I know. I know. How can one just adore St. Patrick's Day and not even do anything for it? Well really the only way I knew (and still know) how to celebrate it was to go to a bar, and my friends ain't about that life, and it's not really my go-to hang out spot either.

But this year was different. I was on a study abroad in New Zealand, and was staying in Auckland - my favorite city that we had visited. So why not take advantage of being in one of my favorite cities and celebrate my favorite holiday?

It was decided that we would celebrate St. Patrick's Day the "traditional" way; going to a bar.

As I mentioned earlier, I don't drink alcohol because of religious reasons, and honestly because of personal experiences I have witnessed in my life,  I probably wouldn't drink it even if I wasn't religious. I've seen my friends drunk, and it's weird because they just totally change. I could go on, but I don't think y'all are keen to hear my rantings.

So I knew this experience would be one for the books.

My friend and I dubbed our headbands with a tiny leprechaun top hat attached to it, green outfits, and set off to Father Ted's Original Irish Pub.

The pub donned a archway made of green, white, and light orange balloons; the colors of Ireland's flag. The crowd and music were loud, and people spilled out of the front door and crammed into the front patio area.

My friend and I approached the bouncer. As we handed him our passports he yelled over the crowd, "You girls may want to head downstairs to the basement. It's much less crowded there!"

I dug through my purse, desperately trying to find my passport. Finally, with my hands completely full with a random hodgepodge of stuff, I handed the passport over to him.

. . . What I forgot was that I had grabbed some pass-along cards before I came to New Zealand that just had some simple information about the LDS/"Mormon" church believe in.
. . . they have a picture of Jesus on the front.
. . . and what I also forgot was that I had slipped one into my passport.

The bouncer flipped open my passport and caught the picture of Jesus before it hit the ground. He promptly burst out laughing. I think my face showed some kind of mixture of bashfulness, awkwardness, and humor. It was weird.

Head turned down slightly, I took back my passport and my friend and I maneuvered through the crowd and into the basement of the pub.

I had no idea what to do at this point. There were a few circular tables, a main counter with one bartender and hoards of people surrounding it, a live band playing Irish drinking style versions of modern day music, and in the middle of all this stood us. Clueless, sober, us.

Amazingly enough, this was the first time either of us had been in a bar. I mean, we had both been in restaurants that had a bar attached to it, but never a straight bar.

"I think we order our drinks."

We walked over to the counter and I stood in what we thought was a line. I began getting decently annoyed when a bunch of business men kept cutting in front of me to order their drinks. 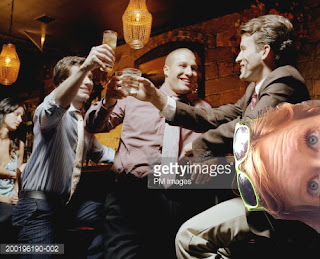 "I think we just walk up there," my friend said.

We pushed through some well-dressed men in suits and approached the main counter, where a flustered woman whose hair was pulled back so tight I thought it was stretching her face out, served drinks.

"Hi," my friend yelled to her over the crowd, "Weird question. What do you have that's non alcoholic?"

Confusion ran over the woman's eyes for a split second. She recovered fairly well and said, "Well, uh we got water, sodas, lemonade, virgin margaritas, or ginger ale from the tap."

"Lemonade," we said in unison.

"Medium or large?" she asked.

The woman nodded and returned back with two large, non alcoholic, carbonated lemonade.

Fun fact: "Lemonade" in New Zealand and Australia is more like Sprite than it is "American" lemonade.

My friend and I stood awkwardly for a second once more in the middle of the crowd, then went to the back of the bar, where there were a few circular tables standing by themselves with a perfect people-watching spot.

We had just been there a few moments, when a shorter, balding man ran up to us, iPhone in hand.

Okay I wonder how drunk this guy is.

I wish I could tell you what he said next, but the next thing I knew he was scampering off to the back closet of the bar and came back with three versions of two different St. Patrick's Day hats (one version was a black and green tall hat that had the brand name of that one beer that starts with a G or something, and the other was a light green top hat with a leprechaun and a rainbow on it . . . cause as I mentioned before I LOVE leprechauns), and two enormous four leaf clover glasses.

We donned our hats on top of our headbands, and wore the giant glasses as well. Then, the man leaned forward and took a selfie with us on either side of him.

Don't worry my friends. You can close your mouth and take your hand off your chest. I, myself, probably would've been more worried if it wasn't for the fact that he was completely drunk and the selfie was slightly blurry and really only showed my face from the nose up anyway.

We stood a few more minutes in the basement, and then decided to see what the upper level was like.

Who knew going up a flight of stairs, through the front patio area, and inside another room would've been so adventurous.

As soon as we hit the top of the stairs, we were engulfed in a sea of people; drunk, loud, unpredictable people. My friend and I pushed our way through the crowd all while holding our lemonade, hats, and glasses. I also found myself cradling my purse, although looking back I don't think there was anyone that was sober enough to even figure out how to unzip it.

My friend was a few paces ahead of me. I was pushing through the crowd trying to catch up, when I saw a woman drop her phone right in front of my feet. I stopped and picked the pieces of the phone up. It now had the back pop off and the battery fly out.

I handed the parts to the woman who it belonged to - a short, skinny woman who shared my blindingly white skin tone and red hair that was pulled back as tight as humanly possible and make up that exaggerated her features. She held a glass of . . . I'm assuming it was white wine (It was white and it was in a wine glass) in one hand. I handed her the pieces which she gripped in her free hand and said, "Oh [explicate], is your phone okay?"

. . . Oh my gosh did I just say honey? I hate when people call me honey! Was that out of sympathy or sass?

The woman stared at her phone with a confused expression a bit longer. Once she registered what had happened she said, "Oh that's fine my phone is [explicate] anyway."

An uncomfortable smile came on my face and I gave her the best response I could think of:

(Tina Fey and Liz Lemon are my hero)

And then I slithered off.

I caught up with my friend and as I was explaining what happened, when I noticed that my leg and foot were soaked.

"What?" my friend asked loudly over the loud music and people.

I retold her the story of what happened with the woman and she responded, "How drunk was she? It's barely eight o' clock. She's got a loooong night ahead of her."

We didn't last long upstairs. The people were as loud as the music and my friend and I had to scream at each other in order to hear one another. After probably thirty seconds tops, we headed back downstairs.

There wasn't much left to do at this point. The lemonade was gone, and really it was kind of dull. Mostly there were just drunk people singing along terribly to the music. Please, if I wanted to hear Mumford & Son's "I will wait for you," I would rather hear the band play it rather than a bunch of off tune drunk people.
Although one lady loosing balance and falling to the ground and laughing hysterically was pretty entertaining.

Before we headed out, we decided we needed to document our evening and the free swag we received. Donning our hats and classes, my friend approached a man who came up to about my elbow. I watched as my friend asked him to take our picture, then him grabbing his friend to take the picture.

My friend came back to me to pose for the picture.

"I don't know. Something like 'murmur too drunk murmurmur no murmurmur my friend. I guess his friend is taking the picture." she responded.

We stood and smiled for the picture . . . 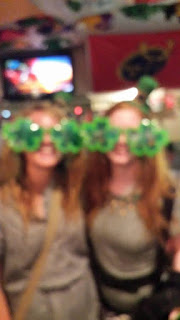 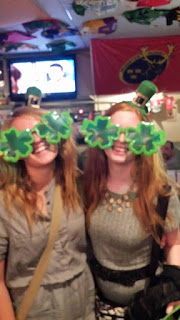 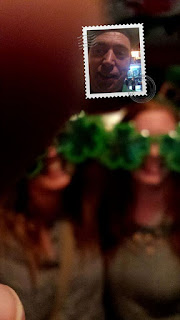 "You taking a selfie?" asked my friend.

The guy laughed hysterically, and finally another friend stepped up to take the picture. He argued at first, saying that the friend was going to drink his beer, and whilst doing that, the friend snapped a picture of us, gave us the phone back, and we went on our merry way. 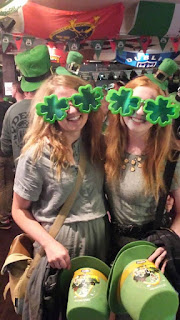 (Those glasses really aren't that flattering, are they?)

As we pushed through the crowd once more to leave, we handed the bouncer one of our free hats (and when I said handed, I mean my friend set it on his bald little head), and went out to explore the city.

"Man how long were we in there for?" I asked, glancing at my watch. "A half an hour."

This experience taught me a lot of things:

- Bars? Not my scene. But they're doable for a half hour because you get a good story in that amount of time.

- I now know how to celebrate my favorite holiday: Get a lemonade at a bar, stay there long enough to get a good story out of it (preferably no longer than a half an hour), and spend time with one of my good friends who will go into bars and stay sober with me.

And thus ends the tale of the Mormon who walked into a bar. And stayed. And got alcohol spilled on her. And free swag. And a new experience.