So I remember there was this week a few months ago when I kept having uncomfortable experiences with men one right after the other. Like, they just kept coming. Thankfully I was out of the country for these experiences, so my chances of encountering them again in my life are slim.

It all started with a sunburn.

Like anyone with pale skin, and/or a sun allergy (or the scientific name for my condition: Solar urticaria *flips hair for dramatic effect

),
I burn easily. And that burn does NOT turn into a tan. It just hurts, and then mocks me with the same whiteness it held before the burn. The bright side of not tanning? No farmers tan. My arms are the same shade as my stomach . . . You know . . . just in case anyone was wondering what shade of white my stomach was . . .
The other bright side of burning? The skin peeling.

Yes, I'm one of those weirdos who likes to peel off the skin from a sun burn. I think it's because peeling skin is a novelty for me because I'm overly cautious with the sun, so bad burns don't happen very often. I treasure such an event.

This one particular instance, I burned BAD. Like, really really bad. The day was cloudy so I thought, "HOORAY! NO SUN SCREEN OR LONG SLEEVES OR HAT FOR ME! FREEDOM!"
Funny thing about New Zealand cloud coverage . . . it doesn't cover you from the sun as well as, say, it does in the United States. #NoOzone 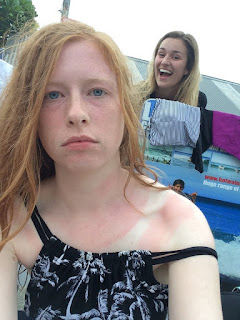 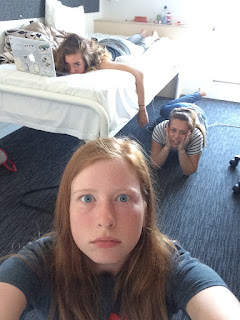 At this moment in time, I was hating my life. I quarantined myself inside and was sun-sick (meaning my skin was so hot I basically had a fever, complete with a headache, fatigue, muscle soreness, nauseated, all that fun jazz. ), my cheeks were swollen like I had just had my wisdom teeth pulled, my lips hurt, my eyes were almost swollen shut because I had BURNED MY EYELIDS (I didn't know that was possible. Learn something new everyday!), and my little legs and chest were coated in hives. It was . . . painful . . . to say the least.

Despite all this, I was mesmerized by the amount of skin that was flaking off of me. And things got REAL funky when my eyebrows and eye lids started to flake off skin.

This one time I was at church and everyone was socializing and eating refreshments in the gym after the meeting. I stepped out into the lobby area to take a phone call. Once I was finished, I noticed how much I was scratching my shoulder. Setting my phone down, I pulled the sleeve of my dress down and looked at my peeling shoulder. And boy, was it PEELING. It was every skin-peelers dream: the mother load of skin. So, I gave a little piece of skin a tug . . . and kept pulling, and pulling, and pulling. It was a never-ending train of skin.

Not gonna lie, I was a little frightened by how long this piece was getting. I was envisioning a potentially horrid scene involving blood. *shutters*

And then, it came to an end.

I stared at it in complete awe and wonder at the length of this piece of skin. I held it up high so that the light was shining on it and I could get a proper look at the masterpiece I had just made. Even Buffalo Bill would be amazed by this piece of skin.

And as I did so, a highly attractive man walked out of the gym to see me holding my piece of pale glory high in the air.

I made eye contact with him, realized that the sleeve of my dress was still hanging way below my shoulder, felt like a Mormon prostitute, balled the skin up, and tossed it on the ground. I was trying to act casual, and I KNOW my eyes held an emotion that read: "Nope I'm totally guilty and yes, you DID see what you thought you saw."

The man looked at me a second longer, then walked off. I pulled my sleeve back over my shoulder, ran to the crowded gymnasium and began to hide myself, being determined that I would NOT be seen by him again . . . even if I was one of nine white people in the crowded room and the only redhead there.


So, this next instance ALSO happened the same day at church.

Now, this was a bad day for me. Church was over, and I was just overwhelmed, frustrated, and finished with the crap taking place that day. Grumpily, I plopped down on a chair in the main lobby area while I waited till we were supposed to go, trying to entertain myself until then.

That's when good ol' chipper Wesley sat by me.

(We're calling him Wesley because I can't remember his name. And, well, this gif of Liz's brief boyfriend Wesley describes this guy perfectly:

"HEY!" and he went on into thee LONGEST slew of words in this history of words. To be frank, I can't remember anything he said, only that it was bizarre and I couldn't even understand half of them because the dude had a New Zealand accent and throughout the trip my ability to decipher their accents was pretty . . . iffy I guess you could say.

Now I probably wouldn't give this guy the time of day, except that he looked like Kylo Ren . . . who I am strangely (and somewhat shamefully) attracted to.

Who's Kylo Ren, you may ask? He's this guy from the latest Star Wars:

I know, I know. Again, strangely (and shamefully).

As I mentioned earlier, I'm disappointed to tell you that I don't remember anything he said to me, only that he told me meaningless jokes I didn't understand and gave sympathetic laughs to, and that he talked a million miles per hour about himself.

I'm not entirely sure if he even asked my name, actually.

Finally, at the end of the conversation, he handed me his business card and said, "Do you have a New Zealand number?"

"Yeah," I said. This was one of maybe five words spoken in our 10 to 15 minute conversation.

He walked off (still talking to me) and I continued to give him sympathetic laughs, willing him to leave.

I plopped back down in my chair and began texting some of my friends who were in choir practice about what had just happened. Soon after practice, a small group of my friends asked me which one he was.

I looked at the business card to remember his name and said, "Uh . . . Wesley?"

"I HATE THAT GUY!" said two of my friends almost in unison, and my other two friends nodded in agreement.

"He's SO mean! He insulted EVERYTHING I liked after I told him I liked it, and basically said I was stupid!"

"He didn't do that with me," I justified, and then remembered that I didn't really SPEAK.

"He's a weird guy," said another friend. "Like, I think he means well. He just struggles socially, I think."

"Well, that makes two of us," I said, giving a big ol' cheesy smile.

"Well, I mean it might be fine if you just wanna kiss someone while being in New Zealand."

I never did call him. Probably broke his heart so much, he had to block me out of his memory, and that's why he didn't even recognize me the next Sunday.


The last story took place later in the week.

I was walking down the street to go grab some grub (dinner. I'm tryin to be hip with the lingo). It was in the heart of Auckland, so it was always pretty busy, and this evening was no exception.

Here. Enjoy this screen shot from google maps to visualize it. #ILoveTechnology

So I'm struttin' my stuff down the street in my big, floppy hat, massive sunglasses, sun gloves, long maxi skirt, and a layer of sunscreen making my skin all shiny and reflective when I hear, "Carmen!"

I ignore it. There's no way someone would recognize me in this city, and I probably misheard it anyway.

. . . was someone really calling my name? NOBODY shares my name.

I walked slowly and kept hearing the calls as I went. I saw a car at a stop light with two guys hanging out the window yelling and waving.

Were they from the church congregation? How did these guys know me?

I pointed at myself and said, "Me?" even though I could barely hear myself say it. There was no way they heard it, too.

They stared at me.

They pointed in a general direction and said words I couldn't understand at all.

More pointing and blabbering. I was pretty confident at this point that they weren't speaking English.

And I scurried back to where I thought they were pointing. I stood there for probably 45 seconds, pretending to be busy on my phone and came to the following conclusions:

I'm now pretty confident they were NOT yelling Carmen. The pointing thing? I think they pointing at someone else and trying to tell me they were talking to them. Maybe.

The other possible solution is that they were cat calling me and I was unaware of it, and then when I approached them, my beauty stunned them so much that they forgot how to speak English.

And so I put my phone away, took off my large hat, and ducked into the crowd, once again determined to blend right back into the crowd so that those guys couldn't find me on the slight chance they recognized me.

I guess this can be a lesson to us all:

We cannot run away from our problems - we only run into different problems.

The same applies with awkward moments.

If I had a beard, you can bet I'd be stroking it right now.

Good awkward to you, my friend.
Posted by Carmen at 11:10 PM