Let me tell me tell you guys the story of my bus driver named Mary.

I lived within a 15 minute walking distance to my elementary and middle school so I never took the bus, except for 6th grade. I transferred to a high-class charter school with school uniforms and fancy things like that. So, I took the bus because it was farther away.

My best friend Katelyn and I got on and off at the same stop so we always rode the bus together. Our morning bus driver was SO COOL. He'd speed over speed bumps purposely so we could jump when he went over them and we'd go flying and stuff.

It was so cool and so much fun and definitely dangerous and probably illegal! I loved it!

And then there was Mary.

(Sounds like the title to a horror film: "And then there was Mary." by Alfred Hitchcock.)

Mary was our afternoon bus driver.

And she was a nightmare.

Mary had all sorts of ridiculous rules. First of all, she wouldn't let us roll down the windows . . . IN A HOT BUS. IT WAS LIKE AN OVEN IN THERE. Not to mention we probably all smelt horrible cause we were little kids or pubescent teenagers.

But nope. She didn't allow it. One cracked open window would lead to a long lecture.

So one day, Katelyn, my friend Melissa and I became rebels (or, if we're going with Harry Potter metaphors, we became Dumbledore's Army). We got so hot we rolled down the windows.


And immediately the rooster crowed.

"ROLL YOUR WINDOWS BACK UP." she screamed in those microphone things each bus driver has.

"We can't understand you!" yelled Katelyn.

*insert giggling from the three of us here*

So then we took it a step further. We started waving to people and yelling hi.

Well that just made that lil bird even more angry.

"YOU PUT THAT WINDOW UP RIGHT NOW AND STOP."

And we ignored her.

(I'd like to think this was the beginning of the days when I started treating "superiors" as equals. It's a major gift and curse I have. Like when you're in a swimming class and your teacher makes you swim an extra lap and you just look at him and say, "I. Hate. You." Then it's a curse.)

Then we took it a step FURTHER.

We stuck our heads and arms out the window. We raised our voices louder like little warriors as we yelled, "Hi!" to people. We waved our arms and tiny hands with pride, as if we were raising swords to battle. We would not be stopped over the battle of the window.

Even after Melissa (or Katelyn? One of them) got her head hit by a tree branch, that didn't stop us.

We were invincible little 11-year-old's.

(Looking back now, I bet Mary purposely drove close to that tree to teach us a lesson. What a devil.)

We grabbed leaves from trees and threw them. We yelled hello and cars and people. And through all this, Mary was LIVID.

She kept screaming over the microphone for us to stop, but it was turned up so loud, the microphone kept cutting off, and her voice was so screechy that all it sound like was, "BGALKSDHASLKDFH."

And so we continued. And nothing happened except a verbal warning.

And we knew we had won this battle.

Now we repeated this process this the next day, except nobody got hit by a tree branch. We rolled down the windows and stuck our heads and hands out to tell the world we were there.

Well, Mary wasn't gonna put up with our crap again.

She sent the suck-up student who sat in the front and tattled on EVERYONE to go get our names.

"Hey, I need your guys' names," she said seriously.

Well Melissa's head was still out the window, so we nudged her.

"What's your name?" asked the suck up again.

"Melissa Prater," she said, and went back to waving at people.


We pulled Melissa back in and pointed to the suck up as she went back to Mary and reported our names.

"WHY DID I TELL HER MY FULL NAME?!" said Melissa.

Now, see, nothing ever came from that, which I don't know why. But Mary DID start to be a LITTLE lenient on the window rule (not sticking our heads out of it - just rolling them down).

What she wasn't chill with? Talking loudly, screaming, standing, turning around, smelly lotions, food, garbage, or kids not having there parents there to pick them up.

Whenever there was a scrap of garbage on the ground, she'd yell at us to pick it up and it was ALWAYS accompanied by, "I'M NOT YOUR MOTHER AND I'M NOT YOUR MAID."

She was so bad, that Katelyn and I began keeping down a list of of her ridiculous rules rude things she said on a sticky note that I hid in my backpack. I was planning on talking to the administration about her, and never did.

But I'm proud of little sixth grade Camilla for trying to seek justice since age 11.

So here are three short blips about Mary:

We were sitting there, enjoying life as most 6 graders do when-

Maybe some did it out of fear. But not Katelyn, Melissa and I. We didn't really respect her either. No, we just were quiet cause we knew that this was the fastest way to get her to move on.

"Oh. WELL GET SOME THAT DOESN'T SMELL."

And she took off driving.

We get to the bus stop right before mine when this kid says, "My mom isn't home."

So, naturally, Mary had some charity FOR ONCE and was like, "Oh honey that's not good - I'll circle the block a bunch of times until your mom gets home!"

Well I turn to Katelyn and we're both like UH UH. NO, NO. NOPE.

So I said just that, only in a polite way.

I wish I could say I was speaking up to Mary because of bravery, but it was totally motivated out of anxiety of the possibility of being stuck on this bus for who knows how long, knowing that it would send our parents into anxiety over not knowing where we were.

"Yeah, me too!" yelled Katelyn.

"It's not that far." Katelyn replied.

"Oh no, if you're just the next stop, I'll drop you girls off then circle around to this stop again."

So she dropped us off.

Our parents were waiting and when we told them what happened, they were both like, "Wow that's ridiculous."

The next day, our moms were at the bus stop in the morning. Katelyn's mom says to my mom, "You'll never believe what happened."

Turns out, Katelyn's mom had called another parent whose kid rides the same bus as us and found out that Mary circled the neighborhood for TWO HOURS waiting for the kid's mom to get home. TWO HOURS.

"Turns out she was home the entire time!" Katelyn's mom said. "Don't know what the kid was thinking. Anyway, a bunch of other kids didn't get home until five thirty or six."

So the ONE TIME Mary is nice, it completely back fires.

We're driving, as is common on a school bus.

Katelyn is helping me figure out how to open  my window that got jammed halfway down.

Suddenly, we hear the blood curling scream from within the bus.

Immediately, Katelyn and I sit our butts down RIGHT as Mary SLAMS on the break....

IN THE MIDDLE OF TRAFFIC!

THE MIDDLE. OF TRAFFIC.

I don't know how familiar you guys are with the Draper/Sandy area, but this was on 123rd south. It is a BUSY street. Actually, let me just show you a google maps picture of that intersection, because I remember the EXACT location: 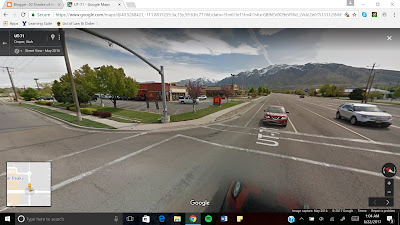 .....Okay that doesn't do it justice. But there's three lanes, okay? And it was busy. And she just STOPS.

So after she slams on the breaks, she dramatically puts the car into park and screams (probably as loud as the kid who screamed in the first place) into the dumb microphone thing she has, "WHO SCREAMED?! WHO SCREAMED?!"

Naturally and understandably so, no one confesses. I mean, I wouldn't want to confess to that.

"I CAN DO THIS ALL DAY!" she screamed.

You ain't no super hero, Mary.

Katelyn turns to me and says in a mocking tone, "I've got my Jamba Juice and my magazine..."

"I'VE GOT MY JAMBA JUICE AND MY MAGAZINE," Mary crows.

Katelyn and I immediately burst out laughing.

Katelyn and I raised our hands.

"No!" Katelyn and I both said in unison.

By now, cars are honking and honking at us and moving around the bus.

"SO WHO DID?! WHO SCREAMED?! I CAN SIT HERE ALL DAY! I GOT MY JAMBA JUICE AND MY MAGAZINE!" she repeated.

I remember vividly imagining Mary actually sitting in the middle of this intersection all day. As car horns continued to be blared as they whizzed past us, I came to the conclusion that the cops would be involved and lil ol' Mary would eventually have to move.

I think a part of me wished that would happen, because maybe she'd stop doing this.

I remember a tiny first grader who peeped up. This girl drove me insane. One time, on the morning bus, I found a penny on the bus floor and she yelled at me and cried claiming it was her lucky penny. I knew that was crap, so I refused to give it up. She tattled to the nice bus driver, and since he was the nice bus driver, he said he was sorry and he was sure she'd find another lucky penny.

Anyway. Mary's response to this was extremely anticlimactic with all the fuss she put up for it:

"OKAY. DON'T DO IT AGAIN," she screamed.

She put the bus back into drive, put her magazine down, and took off driving.

Perhaps she realized she couldn't discipline while she was blocking traffic. Who knows. But honestly, having Mary yell at you is punishment enough.

And THAT is the story of my dear friend Mary.

I just wonder what happened to her. Is she a mother? Is she a maid? Is she still terrorizing school children on buses, or has she moved onto public transportation and is terrorizing on city buses? Who knows.

That was the only year I ever road the bus. I'm grateful for that experience. I feel like you haven't experienced school in the U.S. until you have to take a school bus. What a . . . socially awkward experience that was.

And I'm glad it happened.