This is the last chapter

Welcome! This is the second part to my stories about being a dog mom. If you're just joining me, please scroll down, or click here, to read the first part.

So, without further ado:

This is the story of Poopy Poncho.

This story takes place the first night in my new apartment. I was nervous and excited to have my own place for the first time, and I was very grateful to have Poncho there to protect me (but, really guys. He's very protective of me. I love it).

I took Poncho out for his nightly walk so he could do his nightly bathroom run before bedtime. I came in, and we both settled in for the night. 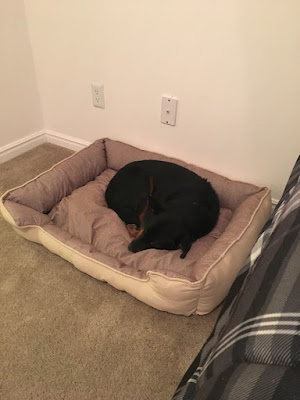 I woke up to Poncho staring at my face. At this point in our relationship, Poncho had yet to bug me. So I sat up and said, "What is it, buddy?"

He placed a single, precious, little paw on the mattress and stared at me intently.

I rubbed his little head, wondering if he just wanted attention, but he kept persisting.

Poncho doesn't really respond to that word . . . or pee, poop, outside, bathroom, or anything of the sort. He's potty trained, but I don't think he has a word associated with it for when we ask him.

So that long rant is leading up to me saying: he didn't respond.

But he remained persistently antsy, so I stood up, hooked him up to the leash, and took him outside.

As soon as we got to the grass, Poncho revealed himself with a massive pile of poo. I picked it up, threw it in the dumpster, and went back inside.

Poncho was running around my bedroom. I groaned, sat up and snapped, "WHAT?"

He kept pacing and running around. I stood up and opened my bedroom door, wondering if he was just getting claustrophobic.

He kept running around. Dead tired, I said to him, "No! You literally just went to the bathroom! You're fine!"

And I flopped back down in a restless sleep.

I know it was the jingling of Poncho's collar that woke me up, but I don't really know what exactly pushed me to get out of bed and walk zombie-like into my kitchen/living room . . .

Where I was greeted by three, massive heaps of watery diarrhea.

And I just stood there . . . in complete shock. My arms were kind of spread to the side, I stared at the heaps with my mouth gaping open. What . . . the what??

And at that moment, Poncho took a squat by my bed and let out a disgusting, watery SPLAT.

Poncho squatted by my bed, his head hanging in pure shame.

Poncho quickly jogged over to me as I threw open the front door and we sprinted outside.

We walked back inside where the pile of poops sat.

I grabbed some paper towels, turned to the first pile, bent down, grabbed a pile of squishy poo, and then --

Poncho hung his head in pure shame as he squatted and splatted.

Poncho stumbled over to the tile floor and splatter pooped, and I said the only thing I could think to say:

"Good boy!" I praised. "You pooped on the tile! Good boooooy!"

Because of the consistent pooping, I decided to go to my parents house where I could put him in the back yard and attempt to sleep.

Throughout the early morning, I had texted my mom various things, and they gradually got more and more frantic.

Poncho has diarrhea! I'm going to try to clean it up. Any advice on how to clean it? Text me when you wake up.

Okay, the diarrhea isn't stopping. I might come home in the morning before work to drop him off in the back yard.

Never mind - I'm coming home now. Don't freak out and shoot me or something.

My parents don't even own a gun. But my overly tired brain was paranoid that they got one without telling me and they were going to shoot me if I scared them.

And so, I loaded Poncho into the car.

I gripped the steering wheel, and was surprised by how awake I was. Apparently the sight of poopy piles in your apartment gives you an adrenaline rush.

I went to pull out of my apartment complex, where there was construction being done. There were machines doing their thing . . . and three construction workers just standing there, chattin' it up. When I pulled up, the spread out, used their little glow stick things to direct me through the maze of construction cones, then went right back to talking.

I pull up to my parents house and lead Poncho to the backyard through the front gate. I then went to my car . . . and grabbed a pot that had been sitting in my car for month and I'd been too lazy to bring it in the apartment.

I knew Poncho was probably dehydrated from all the pooping.

At least, that's what google said.

I didn't want to risk waking my parents up by loudly getting a bowl and filling it with water.

After all, what if they bought a gun without my knowledge and shot me?

I went to the sink in my garage, filled it up with water, and crept inside.

As quietly as I could, I walked through the house and to the backdoor. I slid outside, gave Poncho a few pets, left the pot full of water outside and went to the basement to try to sleep.

My dad woke up to the sounds of Poncho scratching on the door. It crept into his dream. The more he heard that, the more he woke up.

"What's that noise?" asked my dad, sitting up.

"I don't know," groaned my mom, who had also just woken up.

My dad stood up and looked through a window showing the backyard.

Sure enough, there was Poncho, sitting there and smiling away. 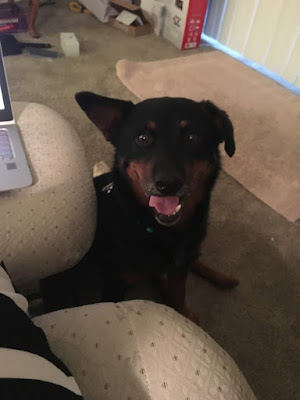 Anyway, my parents stood there very confused as to why their grandog was sitting there, just chillin' in their backyard.

My mom checked the phone, read my texts, and informed my dad of what was going on.

I was late to work, and dead tired when I was there, too. My amazing saint of a mother watched Poncho (whom we had dubbed Poopy Poncho) as he hung out in the backyard, continuing to have the splattery poop problems.

And so, the next week, I'd be staying at my parents house so I could keep Poopy Poncho's poop outside.

Poncho's splatter poop had persisted, so I took him to the vet.

Although I had contacted the vet ahead of time, they hadn't gotten back to me to set up an appointment. They did, however, accept walk ins. And so, with Poopy Poncho in tow, I brought him to the vet.

He took a looong pee on a bush outside the building, and headed inside . . .

To be greeted by two dogs Poncho had decided he didn't like.

Meet my judgmental dog, everyone.

While I waited to check in, I spent the whole time scolding Poncho has he growled and barred his teeth at the two dogs who tried to play with him. At one point, one of the dogs made a move at me to be pet, to which Poncho reacted by jumping on me, wrapping his legs around my thigh, turning his head towards the ouo, and began to bark.

My dog is a protective boyfriend.

I should note that Poncho has gotten 10x better with dogs. He has a little play group he trots around with about once a week.

The vet tech had given me some papers to fill out, and told me that - because I was a walk in - it could be around 45 minutes before I would get a room.

I drag Poncho to the side and begin filling out his paperwork while attempting to shush him.

Then, a husky came through the door.

"Oh no," I said. Because if there's one thing I'd learned about Poncho in the short two weeks I had had him, it was that he hated husky's.

And Poncho and the husky lunged at each other.

And not only that, but Poncho peed all over the ground.

And at that point, I just gave up. I stared at my dog with a look I'm sure said something like, "why me?"

One vet tech began mopping up the pee while saying, "Jeez, how much did you pee?!"

"I know," said the vet tech as she continued to mop up Lake Poncho.

Then another vet tech came up and said, "We have a room ready."

And I dragged Poncho into the room, as he and the husky continued to bark (what I can only assume to be insults) at each other.

And as soon as the door closed behind us, Poncho calmed down, and sat right down next to me.

"Why did you have to embarrass me in front of the vets and all the other dog parents?! They probably think I'm a horrible dog mom now!"

He responded by panting.

"Ugh. Well at least your behavior got us in a room faster. That's a bonus," I said. 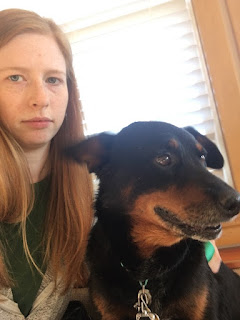 This picture was taken in the vet's room after he peed everywhere and attempted to attack a husky.

I sat there, my mind ruminating on the potential judgmental thoughts all the other dog parents and workers were thinking about me.

The vet came in soon after, smiled at Poncho and said, "Well at least we know you don't need to pee, huh?"

I gave an embarrassed, sympathetic smile.

Aside from Poopy Poncho and Poncho the Punk, Poncho has also earned the nickname/title, "Flirty Boi." He loves to flirt with the ladies and the lady dogs, and so he sucked right up to our vet (who was female).

He rubbed his little head against her leg, sat perfectly for her whenever she asked him to (something I hadn't learned about him yet), and behaved almost perfectly.

She left to go get some medication for him. I turned to him and said, "Okay, seriously. Why couldn't you have acted that good out there?!"

The vet prescribed him pills that helped, but the diarrhea continued after the pills were finished. So, after changing his diet to a "sensitive stomach" brand? It went away.

He has a sensitive stomach, which - I'm not gonna lie - is pretty annoying. Rawhide bones give him gas, pork flavoring (or perhaps pork in general) make him constipated. And he got into something yesterday that made him constipated again. And then yesterday he ate a bunch of crab apples around my apartment and threw them up.

He's also gotten better at sitting. He sits for his food, sits when I put on his leash, and sits when I leave.

So, what have I learned?

When it comes to cleaning up puke/urine/poop, being embarrassed in front of other parents, getting up once an hour to care for a sick child, sharing my bed with a wiggly creature who's not supposed to be in my bed, and having a difficult time knowing what to do when the one you're caring for can't speak?

I'm 100% ready for those aspects of motherhood.