I go through a number of small, awkward moments daily. Most of these moments aren't exactly long enough for an entire blog post. So, here is a random hodgepodge (a word that we, as English speakers, don't use nearly enough) of awkward moments that have happened to me recently.

So it's not uncommon to see people wearing BYU attire at Disneyland.

Which is exactly what happened this last time I went to Disneyland.

My friend and I were exiting Space Mountain and making our way over to Indiana Jones, when I saw a guy wearing a BYU shirt.

We passed him, I raised my hand for a high five, made eye contact with him and said, "Go cougars!" (BYU's mascot is a cougar. Like, the animal. Not the old-ladies-on-the-prowl-for-a-young-man type.)

We walked past each other, my hand still raised, and I was ignored.

So I did the most logical thing:

I gave myself a high-five.

The time I made a waterfall

I was on my study abroad in New Zealand. We were moving from the North Island to the South Island.

I was boarding an airplane and was extremely grumpy because, well, it’s 5 a.m. and I’m not a morning person.

I had hastily packed the night before, but had left too much stuff out and shoved it all in my backpack the next morning.

As a result, my backpack was the size of a parachute.

“Come on,” I grumbled, punching the backpack into the compartment. “Can. You. Just. FIT?!”

One last final shove, and it was in.

And that’s when I saw the water trickling down and dripping out of the compartment . . . and right on top of a man’s bald head.

My eyes followed the trail of water and it lead right to . . . my unopened water bottle.

I frantically tried to close the water bottle, turned the cap the wrong way, opened it more, panicked some more, and ended up just pulling the water bottle out altogether and sticking it my jacket pocket.

Water continued to drip steadily onto the man’s bald head. And he had a reaction that I appreciate to this day:

He sat there, staring straight forward, and just blinked. His mouth was stretched out in this line, and his face just read, “Of course this would happen to me. Oh well.”

I’m still so grateful for that reaction. He could’ve yelled at me. He could’ve caused a scene. He had good reason to, after all. Water was being dumped on his head at five in the freaken morning.

But instead, he just sat there like, “Well this is happening. This is a thing.”

And this was my reaction:

I pulled the sleeve of my jacket over my hand and started dabbing the water off of his head.

It was pretty useless, and my friend standing behind me gave me a nudge and said, “Come on, Carmen.”

I began to half walk/half be pushed away from the guy, my arm still outstretched while I continued to spew never-ending apologies.

We were at a rhino reserve in Uganda. After watching an impactful (and frankly, depressing) documentary on rhino poaching (which you shouldn't do, by the way. It's stupid and useless and harmful to the animals and the enviornment), I stepped out of the room we were watching the documentary in, and went outside to go back to the bathroom.

That's when I was greeted by a warthog.

This warthog, to be exact: 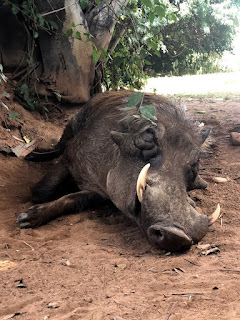 I stood there, frozen. The warthog was just standing there too, minding his own business. I couldn't tell if the warthog was looking at me or not.

I also realized in that moment that, everything I knew about warthogs, I learned from The Lion King.

And I'm not totally sure that information is completely accurate.

Regardless, it wasn't helpful information anyway.

I didn't exactly know how to handle this situation. So I did what I do best:

I ran away from my problem.

Well, kind of. I very slowly began to do a sideways shuffle away from the warthog.

"Hello," came a voice from behind.

It was one of the workers of the rhino sanctuary.

I had forgotten that we generally needed to be accompanied by a worker while moving from building to building on a reserve/safari, in case we run into wildlife. That way, the workers can handle the situation and prevent the idiot tourists from potentially dying via hippo.

So, you know, we needed them to prevent the exact situation I was in right now.

(Also, in one of our camps, we fell asleep to the sounds of hippos and I found it oddly calming.)

"Are you going to the toilet?" the worker asked in his thick, East African accent.

He nodded and said, "I show you where it is."

I had completely spaced the word "warthog," and said the one animal that came to mind:

I face palmed myself internally.

"No, he will not harm you unless you try to harm him."

As we walked to the bathroom, I reassured myself that he’s probably used to arrogant white people asking stupid questions.

That’s what I told (and still tell) myself, anyway.

Who knows if that's actually true.

An awkward date I went on

This took place after a rough breakup. I decided to give dating another try, so I downloaded a dating app.

I still regret this decision.

But, I stand by my life motto (the same motto that got me through the following story): Everything in life is a good experience or makes a good story later.

I agreed to meet up with a guy at a nearby sandwich/panini place (he let me pick where to eat). The way our conversation had shifted before the date, I was getting a vibe that this wasn’t gonna be as great as I initially hoped, so I picked somewhere that I enjoyed and didn’t want to pay for.

Might be mean, but I had to get something good from this date.

We met outside the restaurant, ordered our food and sat down. The casual, get-to-know-you questions began. You know, the “where are you from”, “what are you studying”, “what year in school are you”, etc.

“So, how many siblings do you have?” he asked.

I responded, then said, “What about you?”

“Yeah,” he said. “But I had an older sister. I didn’t know her, though, because the government came when she was a baby and like, kidnapped her and put her in a dumpster or something.”

“Oh, wow. That was probably hard for your parents. I actually have a couple friends who’s family adopted girls from China who were abandoned as babies.”

“Wait, are you serious?” he asked.

“Yeah, like one was abandoned in a hotel, and I think the other actually was in a dumpster or something like that,” I said, taking a bite of my sandwich.

And so I did what I do when I can’t run away from my problems:

I laughed it off.

But, like, I really didn’t know exactly how to handle the situation so . . . I think I definitely overdid the laugh.


But what I really wanted to do was laugh my way out of the date.


I didn't, though. I'm not that socially inept.

I honestly can’t tell you what happened the rest of the date. I think I just went on autopilot and internally begged for it to be over. Conversation continued, but none of it was riveting.

At the end of the date, we exchanged phone numbers, and I went to the car thinking, “Oh man I wonder how late it is. That was pretty long –.”

My date was 45 minute long.

Also, I haven’t heard from him since.

I started my period three days early, in the middle of the day, while I was at work.

No big deal, I've been dealing with this for quite a few years now. I had some back-up pads in my desk drawer for occasions just like this.

So I went to my desk, pulled open my drawer and opened the package of pads I had stored in my desk. I had bought these pads while in Africa after I discovered I forgot to pack feminine hygiene products.

Well, my body decided not to have a period that month (don't worry - I'm not pregnant) so I ended up never using them, thus becoming my back-up products at work.

I went to the bathroom to put my pad in, and realized the pad was massive. First of all, it had been quite a few months since I had worn a pad, and it had been even longer since I had used one that thick. Like, I didn't need that much protection, but I was sure getting it.

While I was on the toilet bleeding my uterus out and experiencing period poop (every woman who has experienced a period knows exactly what I'm talking about right now), I realized that the bow of my dress . . . was sitting in the toilet water.

I about threw up. First of all? Disgusting. Second of all? My bow had been tied SO CUTE before, and now I was gonna have to untie it and take it off! Third of all? . . . how on earth was I gonna take it off without splashing nasty toilet water everywhere?

It proved not to be as difficult as I originally thought it would be, but it was a definitely process. I untied it with two fingers, trying to prevent myself from touching the now-contaminated bow. Then, carefully, I set it on the ground, where a puddle began to form around it.

I gagged, finished my business, picked the bow up with my pointer finger and thumb, and made my way to the sink where I washed my hands and pathetically tried to rinse/clean off the bow.

Here's what I'm most grateful for about this experience: Nobody came into the bathroom while I was in there. Nobody. So nobody had to see me washing an article of clothing. And nobody watched me as I wrapped it in a paper towel.

You know what I was also extremely grateful for? This dress had pockets. And not only that, but I had put my car keys in my pocket, and not my purse, so I had my car keys on me.

And my car is exactly where I'd store my now sopping-wet-and-filthy bow.

And guess what else I'm grateful for. The hallway outside the bathroom was completely empty. It was legitimately a miracle. I was able to jog down the hall, outside and to my car while holding a wet piece of fabric bundled up in a soaking paper towel without running into a soul.

This is evidence that there is a God and he was sure watching out for ya girl.

And that concludes my random hodgepodge of awkward moments.

Embrace your inner awkward, everybody. And enjoy your day. And life in general.