The time I got plastic surgery

Okay, so it wasn’t technically plastic surgery, but it fell under that category when it came to insurance, and I find it hilarious to tell people that I got plastic surgery, because their first reaction is always shock and they wrack their brains to see what part of me has been altered.

I can’t remember what the actual procedure is called. But, basically, I took a laser to the chin to get rid of pretty big acne scars I’d had since high school. (Sometimes I see pictures of myself from high school with the zits that caused those scars, and I dramatically point to the picture and go, “You.” to the zit.)

Here’s what was different about my acne scars: the majority of people have acne scars that are indents/divots into their skin. Mine, however, are not-so-little bumps. Thankfully, those scars are only located on my chin, and not everywhere. So, this laser treatment would zap those bumps in hopes of flattening them.

So, after a couple of preparation doctors appointments, it was time to go forth with the laser treatment.

I plopped down in the chair. It was similar to a dental chair. They leaned the chair back so that I was basically laying down flat, covered my eyes with some dark goggle type things, and began zapping my chin.

It definitely hurt. Part of it was because I’m a redhead. The gene that comes with being a redhead includes being more resistant towards numbing medicine (such as epidurals). The doctor forgot to take this into account, and gave me the normal amount of the numbing medication. After expressing pain and wincing multiple times, she said, “Oh! Oh my gosh, I’m sorry. You’re a redhead. I forgot that I have to give my redheaded patients a double dose.”

She injected my chin with more medicine and was able to finish the procedure with me being pain-free.

What came next, I documented on my Instagram story . . . and I’m so grateful I did. Because it captures it in a way that my words never could.


So, without further ado, please enjoy the next 12 hours following my procedure.


So, what happened next?

I drove to my apartment, still crying. I parked, hid in my car for probably 20 minutes, and sprinted into my apartment (still crying) where I promptly took a nap.
I woke up when it was dark. Keep in mind, this was summertime, so it got dark pretty late. I had slept a long time.

I looked at my chin to see it puffy and crusted with dry blood. And, wouldn’t you guess it, I started crying again.

It was time for my nightly cleaning of my new injury. Cleaning included soaking it with a vinegar-soaked cotton ball for 15 minutes, followed by rubbing it with a liquid steroid, an ointment used for diaper rashes, Vaseline and, lastly, taking two antibiotics. This would be part of my nightly routine for about the next two weeks.

I had transferred my vinegar-mixed-with-water concoction into a water bottle, which I dunked my cotton ball in. I plopped down on the couch, placed the now-soaked cotton ball on my bloody chin and watched TV with my roommates as I snacked on a Texas Roadhouse roll.

My chin was still aching, but at least I had my roll.


In case you didn’t catch that, I drank my vinegar soak. Yup. Took a big, ol’ sib. And promptly spat it out onto my leggings.

I bet you can guess what I did next.

But, I’m still grateful I didn’t spit it out on my Texas Roadhouse rolls.

The next day, my chin looked better. It had stopped bleeding and was beginning to heal. Each day, it got better and better, though my chin remained an angry red for quite some time (and, to this day, the skin on my chin is still a ting pinker than the rest of my face. Thank goodness for makeup).

Two weeks later, I was back at the doctors, sitting up in the all-too familiar dental-like chair.

The appointment was earlier in the morning. Now, at this time in my life, I didn’t have a job or school going on. This, combined with the fact that I am not a morning person, meant I got up late and was running behind.

I legit threw on some basketball shorts, wore the shirt I wore to bed, brushed my hair and teeth, slid into some flip-flops and ran out the door with my mom, who was accompanying me to the doctors.

So, there I was, back at the doctors, sitting up in the dental-like chair as my doctor held my face and got extremely close to check out my acne scars.

“Hmmm, looks like we’ve missed a few spots,” she said.

My heart began to race. I was still recovering from the first time! There’s no way I could do this again!

“We’re just going to do some touch ups; we won’t do the whole procedure,” she reassured me. Honestly, she could probably see the fear on my face. I am terrible at hiding my emotions.

I remained sitting up, and she took a small laser to my face. I didn’t need to back up or cover my eyes this time. She numbed part of my chin (this time using twice the amount to begin with), and this time, as opposed to lasering my whole chin, she targeted specific spots.

Now . . . I was expecting this appointment to go by quickly. I thought I’d be in and out in no time. It was supposed to be just a check up, not a touch up.

Which is exactly what I told myself when I left my house without eating anything for breakfast. 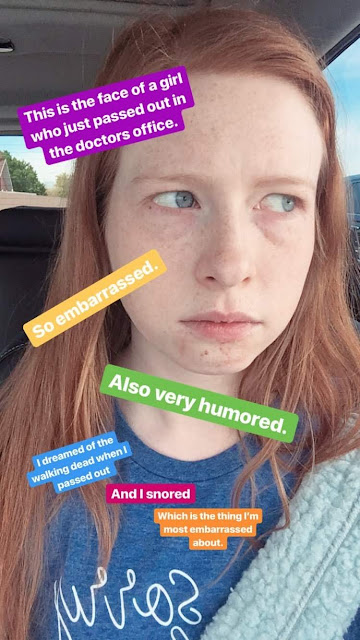 IIIIIIIIIIIIIIIIIII passed out. I had caught myself in time, however. I could tell it was going to happen because of how sick and lightheaded I began to feel.

“Stop,” I said, reaching my hand out. “I didn’t eat breakfast. I’m either going to throw up or pass out.”

I leaned forward to put my head in my lap, but my dermatologist said, “No, I need you to lean back.”

And that’s the last thing I remember.

I was walking in the woods in the dark. Character's from the Walking Dead were all around me. I turned, and saw Negan – the character that my celebrity crush plays. He smiled at me and said,

There was a loud, buzzing sound. That was the sound the chair moved when it was being tipped backwards. I was starting to come back to. The chair was leaned back almost all the way. I wasn’t just flat on my back; my legs were slightly higher than my head so that blood could get to my head.

Time seemed to move by in slow motion. It seemed like my chair was tipping back for an eternity.

I don’t know how long it had been before I spoke. I’m sure it’s not as long it felt. But, I finally said, “Did I pass out?”

“I might throw up,” I said, my eyes remaining closed.

I heard her walking, then the door open and close.

“I dreamed about Negan,” I moaned to the doctor.

I’m sure she had no idea who I was talking about.

“Well, I guess you did snore,” she said.

“Somehow that’s more embarrassing to me than the actual passing out.”

The nurse came back. I heard her place a bucket on the ground and said, “I have some juice and crackers for you when you’re done.”

They went back to zapping my chin. I began to feel a little bit better, but I didn’t dare open my eyes.

“I’m surprised you’re not totally freaking out. If my mom were here, she’d be in a total panic,” the nurse said, directing the question to my mom, who was sitting at the side of the room.

“Oh. Well, we do this. I pass out all the time, her sister has passed out. It’s just something we do,” she replied.

And it’s true. Maybe this is just part of being initiated into the family. My dad and one of my sisters are next.

A few minutes later, the doctor was done.

“Okay, we’re all done,” she said, and I cracked my eyes open to be greeted by the bright, florescent lights.

She rolled her chair back to her computer and said, “Come back in a couple weeks for another check-up. You can make that appointment up front, but don’t sit up yet. You’re still looking quite pale.”

I always know that, if you can tell I’m pale, then I’m obviously not doing well. So, I trusted her and remained laying back.

“I’m going to Africa in a couple weeks,” I explained. “Should I make the appointment before or after?”

She got really excited as she had recently returned back from a trip to Rwanda, the country I was going to.

“Don’t worry about an appointment until you get back from Africa. Just make sure to always wear sunscreen, especially on your chin. I do not want to see you with a tan when you come back!” she said.

A few minutes later, I felt back to normal aside from a little bit nauseous. I drank my juice, ate a few crackers, set up an appointment and left with my mom feeling mortified that I had snored when I passed out.

Let’s fast forward to after my trip to Rwanda. It was a final check up to see how I was healing and see if any more touch ups needed to be done.

I sat back in the familiar dental-like chair. This time, I had eaten.

My dermatologist walked in, and a huge smile came across her face and she exclaimed, 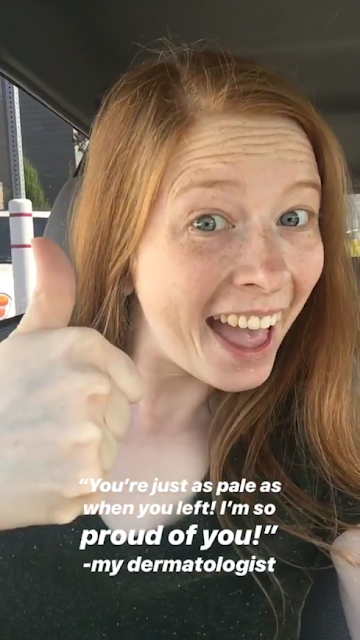 I was proud of myself, too.

ANYway. Everything had healed properly and was back to normal. The acne scars I was so self-conscious about remained, but they weren’t nearly as noticeable as before. And, they’re easier to cover with makeup now.

Am I glad I did it? Yes. Would I do it again? Probably not.


And that, my friends, is the story of the time I (kind of, but not really) got plastic surgery.

Have an awkward day. 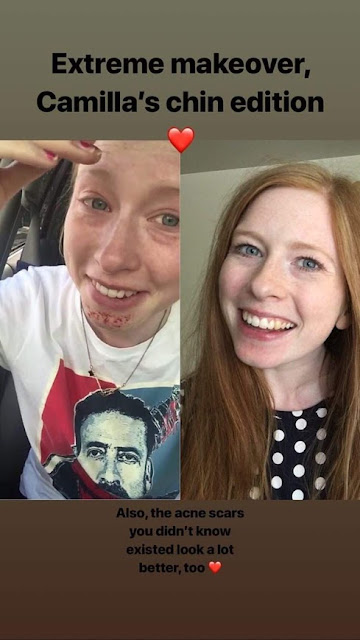 (This was taken a week apart)
Posted by Carmen at 2:54 PM