This is the story of my date with Vagina guy.

The reason why he has this nickname will become apparent by the end of this entry. It's the climax of the story, so I'm not gonna spoil it now.

I met Vagina guy on the same dating app I met my husband on. The first date with him went well. He was a bit . . . weird, but it was still a good date.

We met up to get tacos. I got there before him and stood inside the restaurant waiting for him.

He got there about five minutes later, walked in, and said, "Oh, good. You look like your pictures."

We got our food, sat down, had normal conversation.

One weird thing I noticed right away with him, however, was that he'd dodge basic questions. For example:

He asked me, "How old are you again?"

I tell him, then asked, "Remind me your age?"

I forced a laugh, then paused, waiting for him to respond with his actual answer.

He shrugged and said, "Close enough."

I remember at that moment thinking, This guy would be a great politician with the way he's dodging questions.

Now, part of me wonders if he had lied about his age on the app or something, but he did this with so many things.

Like at one point, I said, "Okay, so your mom's a professor. What did you say she taught?"

Keep in mind, he had told me earlier that evening what she had taught. I had just forgotten.

His response was something along the lines of, "How to tame lions."

Then I'd pause for him to respond with the real answer and . . .

I mean, his responses were funny, but one false answer right after each other?

Aside from that, however, the date was good. We were able to carry a good conversation and got along pretty well.

So, the next day, when he asked me on another date, I agreed. His response, though, was a bit . . . too forward for my liking.

I put the breaks on that HARD.

"I'm not comfortable driving with someone until the third date," I told him. "I'll meet you there. And, that time doesn't work for me. I can come between [insert times here] instead."

Honestly? The time he suggested worked fine for me. I just hated that he told me that's what what we were doing and didn't ask me if it worked.

And surprise locations? Nah, man. That's how you get murdered.

Thankfully, he was nice about it and complied my requests. He told me we were going to a petting zoo for the date. 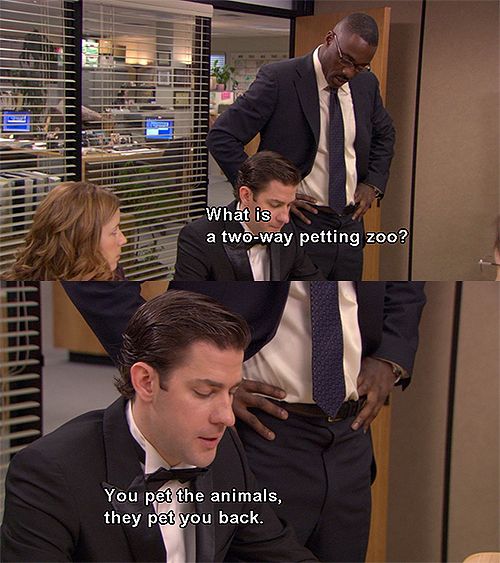 (Not this kind of petting zoo.)

I was honestly pretty excited about this, cause I LOVE animals, and the thing only cost, like, three bucks per person. (I HATE expensive dates, specifically with someone you're still getting to know.)

Before my second date with Vagina guy, however, I went on a date with my now husband.

My husband and I had a good rapport right off the bat. We had a lot in common, I felt comfortable around him, we carried a good conversation, and had a lot of fun together. My date with him was much better than my date with Vagina guy.

So when the second date with Vagina guy came along, I wasn't looking forward to it as much as I initially was. I mean, I wasn't dreading it, and I was hopeful that the date would go well, but I knew I was more interested in my now-husband than I was in this guy.

So I drive up, and the date starts.

It got off on the wrong foot right away.

"You're wearing the same coat as last time," he said to me.

I looked down at it, then back at him and shrugged saying, "It's my favorite coat."

"Well don't you own any other coats?"

He nodded, and we walked towards the zoo.

Things continued to get uncomfortable.

"I'm allergic. So whenever I come over, he'd just have to be put outside the whole time."

But my brain said:

Throughout this time in the petting zoo, he also started pulling small moves on me. Like, touching my shoulder, playfully patting my arm, stuff like that. It was totally appropriate, honestly.

. . . but every time he touched me, I flinched and pulled away.

Honestly, it was weird that I responded that way. I don't normally react that way, especially with someone I haven't gotten creepy vibes from. Yeah, he was a little awkward (but so am I), and I could tell we weren't as compatible as I initially thought, but I didn't think he was creepy.

Looking back now though, I can see that my sub-conscious was totally creeped out from him and it hadn't hit the forefront of my brain yet.

Either way, I took my flinching as a sign that this definitely wasn't going to work out.

We finished our time at the zoo and, honestly, I was ready to go home. He, however, enthusiastically headed towards the chocolate shop next door saying he'll buy me some chocolate.

(Why is it that, whenever I go to a chocolate shop on a date, it's always with a weird guy???)

Dread filled my stomach because I just wanted to go home and I did not want this guy spending more money on me. But, I didn't know how to get out of this situation, so I went with it.

On our way to the chocolate shop, he asked me how old my sisters were. I told him, and he—like most people do—noticed the significant age difference between me and them.

"Oh, so you were a mistake child?" he asked.

I get this a lot.

Usually, that shuts people up.

But not Vagina guy.

"Oh, man. How did your dad feel about you being a girl?"

"I mean, he tried for all those years and then didn't even end up getting a boy? Didn't that bother him?"

I was so taken aback, honestly. Like, who says that?

I said a prayer in my head for whatever woman he may end up with, as he would inevitably end up unnecessarily blaming her for the sex of their future baby.

"Well he never said it bothered him," I said shortly.

We got the chocolate, then sat down. I only got one piece because the chocolate was very expensive and, as I mentioned earlier, I didn't want him to spend anymore money on me.

I mentioned how much I loved my visit to Africa, and he said something along the lines of "oh I bet it was super, super poor there."

"Oh, actually Africa is a lot more developed and safer than people think. The countries we went to are really flourishing economically and—"

He interrupted me by correcting me.

Guys. He corrected me about a place I had visited and he had not.

He corrected me about something I had studied a lot in undergrad.

And then he began talking about how good colonialism was for Africa.

A fire of anger and annoyance irrupted in my stomach.

I kept my mouth shut, though. I didn't want to waste any energy on him. I just wanted to get out.

Then, he started talking about intense political issues and, well, let's just say they were the complete opposite opinions as mine.

Again, I just sat quiet. I didn't want to argue, I didn't want this date to go on. I just wanted it to end because, at this point, I knew that nothing between us was ever going to happen.

After rambling for a good amount of time, he stopped and said, "Oh my gosh. I can't believe I'm talking about politics on a first date."

"It's okay," I said (lying), "I once said on a first date that I wanted to help victims of female circumcision."

"Oh man, I once went on a date with a girl who talked about how vagina's are shaped like flowers or cactus's. So—what's the shape of your vagina?"

Dude, I don't care if you're joking! No one should ask anyone that question, except maybe if you're a gynecologist talking to a patient! IT'S SO UNCOMFORTABLE!

There was an awkward moment between us as I sat and silently shook my head at what he had just said. He just kept laughing. It was so uncomfortable.

He tried to hold my hand.

Right after he had just asked what the shape of my vagina was.

"Well, I'm . . . cold. I better get going. Thanks for the chocolate." I said, standing up and abandoning his hand.

He walked me to my car, we hugged, and I sped away SO fast.

Neither of us texted each other to set up another date.

But you know who did text me to set up another date?

And that, my friends, is the story of Vagina guy.
Posted by Carmen at 10:30 AM