Awkward moments with my husband

Oh hey guys! It's been a while.

And, to be frank, it will probably be a while longer after this blogpost, too.

Basically, adulthood sucks and is busy, leaving me very little time for blogging. So although I'm making time for it right now, no promises on how it'll be in the future.

Not to mention that, the more I see celebrities or random people being "canceled" online, the more I fear that one day I'll be canceled for something I wrote on here ages ago.

I think I have anxiety.

Regardless, I've missed this, and I'm excited to share with you all a lil compilation of stories having to do with my hot husband.

Now, this may come as a shock to you guys, but I'm a pretty awkward individual, especially when it comes to dating. So with this information in mind, it should come as no surprise when I say that my now-husband and I had many awkward moments during the dating phase of our relationship.

In honor of Valentines Day, I'd like to share them here. I will be referring to my now-husband on here as 'B', as I hate using people's real names on this blog.

So without further ado: here are awkward moments between me and my husband that occurred while we were dating:

The first time B told me he was interested in me, it was after our third date. We had gone axe throwing, then B drove me back to my apartment, met my dog (which went as well as I could've hoped, as my dog--Poncho--was generally aggressive towards men), and we were now walking to his car together. I had taken Poncho with us to get him out of the apartment to pee.

Now, Poncho was not good on a leash. He would pull so hard he would choke himself, which would lead to him making noises that I dubbed "Darth Vader sounds." Sure enough, as we walked to B's car, Poncho was doing this.

When we approached his car, B turned to me and told me that he liked me and was interested in dating me . . . all while Poncho yanked relentlessly on the leash. The conversation went something like this:

Me: *stumbles from Poncho pulling hard on the leash* I like you too.

B: Are you free on Friday?

Poncho: *stands on hind legs in a vain attempt to reach the bird he was barking at, continuing to yank relentlessly on the leash*

Me: *stumbles again* Yeah, I'd love to see you then.

I then pulled hard on Poncho's leash as I leaned in to hug B. He said goodbye to Poncho, who barely acknowledged his existence (the best kind of reaction for him, to be honest), and drove off.

I watched B drive away, and turned to Poncho.

"Seriously, dude?! You're the WORST wing-man."

Poncho responded by making Darth Vader noises from pulling so hard on the leash towards the bird he desperately wanted to get.

B later told me he was going to kiss me that night, but it didn't seem right.
I wonder why . . . 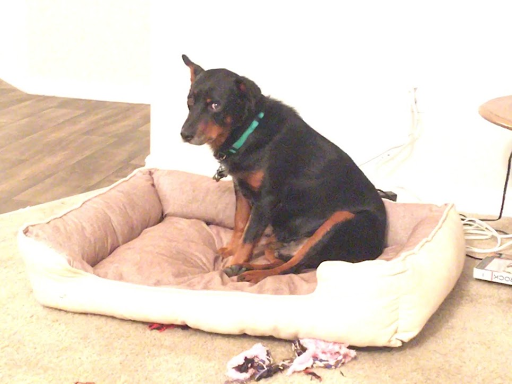 The first time saying "I love you."

It had been about three or four months since we had started dating. At this time, my sister was in town visiting. We were sitting on my parents back porch, talking about B. I was telling her about all the things I liked about him and said in passing, "Ugh, I love him--NO I DON'T! NO I DON'T! I DON'T LOVE HIM!"

My sister just laughed in response.

Now, B was living about an hour away from me at this time, leading us to talking on the phone frequently.

One night (about three nights after I had that conversation with my sister), we were chatting on the phone about who-knows-what while I played the Sims on my bed and snuggled with my dumb dog.

We had been chatting for almost two hours, and it was time to wrap up on conversation. (You have to understand how big of a deal this is. I hate talking on the phone, and the fact that I talked to him for two hours and it didn't even phase me or make me anxious was a huge deal.)

We had made plans to see each other that weekend, and now it was time to go to bed since it was getting pretty late.

"Yup. See you then. Love you, too," I responded naturally.

Then it registered what had just happened. I sat up straight and yelled into the phone, "Wait . . . WHAT?!"

"Should we talk about this?"

That Saturday came. We would meet in a city about half-way between ours for our dates during the week and on weekends. After our planned date, B drove me to a beautiful spot in the mountains that overlooked the city. You could see the lake, the lights, the traffic. It was gorgeous.

We chatted for a bit, and established that we were certainly falling in love with each other, and were well on our way to actually being in love . . . if that makes sense.

I remember smiling at the end of the conversation, then turning to look out the window. Now, a lot of cars were parked at this area because, like I said, it was a beautiful outlook and I'm sure a lot of couples held romantic moments there.

As I turned to look out the window, I glanced at the car in front of us . . . and saw a girl bawling in the passengers seat. I perked up and leaned forward, telling B to check it out."

There was a guy in the drivers seat and he was most definitely sitting there looking . . . defeated.

"They are having a very different conversation than we are," I said. "Should we go talk to them?"

Poncho had earned the nickname "the chaperone" after I started dating B. He was not a fan of the two of us canoodling and smooching, and would often intervene during these moments. But this moment was one of my favorites.

I had just gotten a couch for my apartment. Before, B and I would sit on the floor cause my only furniture in front of the television was a single chair. So, we were pretty excited for the couch.

B and I sat down, watched a movie in comfort for once. At the end of the movie, B leaned in to kiss me . . . and before we could, a furry thing intercepted us.

Poncho had climbed on the back of the couch, slithered UNDER B's arm (which was around me), and sat in B's lap, beginning to lick his face. Poncho had cock-blocked us.

We both scolded him and I pushed him off the couch. He didn't climb back on, but he did sit right at my feet, making sure no funny business took place. 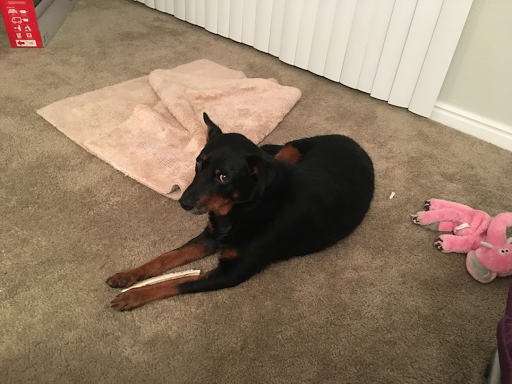 B and I had begun to talk about marriage at this point. Before making a decision, we decided to take a trip together. A few weeks before B and I had started dating (six months ago, at this point), I had planned a solo trip to Boston. We decided to make it our 'pre-marriage test vacation' and B joined me on the trip.

Everything. Went. Wrong. And, honestly, I'm grateful it did, because throughout the trip, I was never annoyed at B and we still got along really well even as disasters occurred around us.

One of the things that went wrong took place one of our last nights there. We wanted to have some fresh fish while we were in Boston, as it was right on the harbor, and we knew it would be delicious. It was our last night, and we decided to splurge.

I pulled up directions on my phone, and we took the nearest train to the stop closest to the restaurant.

As we walked upstairs and into the daylight, we were met with . . . a massive rainstorm.

The streets were nearly empty. Everyone had fled inside to wait it out. B and I, however, we were hungry, and I was like, "It'll probably lighten up. And besides, it's just a five minute walk. Let's just go."

And so, we trekked out in the rain and to the restaurant.

The rain didn't lighten up.

And we got lost.

The restaurant was only a five minute walk from the train station. But, it was located down a shady alleyway. The GPS didn't take us down the alleyway. It took us to the alleyway. Then it was all like, "Congrats you've reached your destination."

We had no idea you had to walk down the alleyway. There was no sign pointing us in that direction, and the GPS was no help. This led to us walking back-and-forth down the street for at least 30 minutes. At least.

I know I expressed to B that we should just give up and go somewhere else, but by this point he was determined. We had looked this long, and we wanted high-quality fish!

Finally--I don't know how--we found the restaurant. By this time, the rain had lightened up to just a sprinkle. But we. were. soaked. And I mean soaked. Our clothes were sticking to our bodies, our shoes squeaked, and our hair looked as if we had just stepped out of the shower. 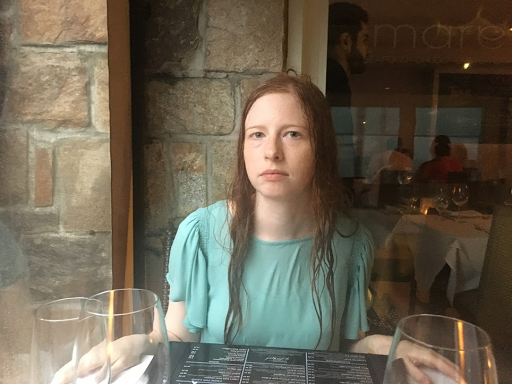 The two of us stumbled into the restaurant, and the hostesses burst out laughing at the sight of us. I couldn't blame them, really, and I would've done the same.

"Here, there's a warmer room over this way. I'll seat you guys there."

She led us to our table in the warmer area. We took a seat, and discovered that this was a fancy restaurant. Everyone around us was sipping wine, dressed in their Sunday best, with their hair done up as if they were going to a wedding.

And then there was B and I.

He was in a a T-shirt and jeans. I was in a skirt that didn't really match my shirt. Both of us were soaked to the bone. And both of us were definitely soaking the chairs we sat on.

Yeah, we got some judgmental stares from the older folks.

Guys, there's so many stories I want to write. Like, seriously, I wrote down a long list of potential moments to write here. Honestly, I'm not writing all of them because then this post would be ridiculously long if I did so. So, I'll end with one more moment:

B and I were engaged at this point. It was the summertime, and B's family owns a boat and a dock. B and I ventured out to the lake where his mom and his mom's best friend were skiing. After B skii'd a few rounds, he and I began to play in the water around the dock. B's mom's friend was packing up her stuff, getting ready to go home. We bid our farewells as she loaded up in her car, and B's mom ventured off to . . . honestly, I don't know where. I just remember she wasn't there.

After a few moments of kissing, we heard, "Oh I just love seeing you kids in love!"

We pulled apart and saw B's mom's friend standing on the dock, staring at us. She had left, but had to come back because she forgot some of her stuff. And she had stumbled upon our . . . moment.

We apologized, and she reassured us that it was fine . . . but I was too busy hiding under water to actually hear her.

Anyway. I hope you all have a fantastic Valentines Day -- my least favorite holiday! And I hope you enjoyed these stories. I love B very much, and am grateful he's as awkward as I am.

PLEASE TELL US IF IT WAS YOU BECAUSE WE THINK IT'S HILARIOUS AND WANT TO KNOW.

Thank you, and goodbye.